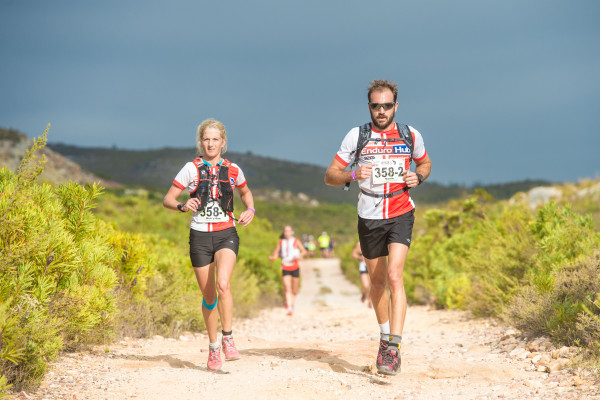 AfricanX is a bucket list race that I have wanted to do for years. It is an event that participants talk about long after they have received their finisher’s medal. Having finally had a chance to experience it for myself it is clear to see why.

The lack of a regular training partner meant that I hadn’t initially planned to do AfricanX this year. Ten days before the race I got a call out the blue asking if I would be interested in partnering with Morné van Greunen and representing Enduro Hub.

From previous race results I knew that Morné was a super strong runner and that I was going to be out of my league. However, I am big believer in grabbing every opportunity with both hands, so despite my fears I said yes. I was excited but very nervous at the same time.

Our busy schedules meant that we couldn’t squeeze in any combined training runs and had to make do with a quick coffee the day before the race. Our racing plan was simple: Race our hearts out and love every moment.

After a big hug from my husband, a car filled with 6 pairs of running shoes, running kit, running magazines and a postcard of Table Mountain for motivation I made my way to the race village at Houw Hoek Inn. 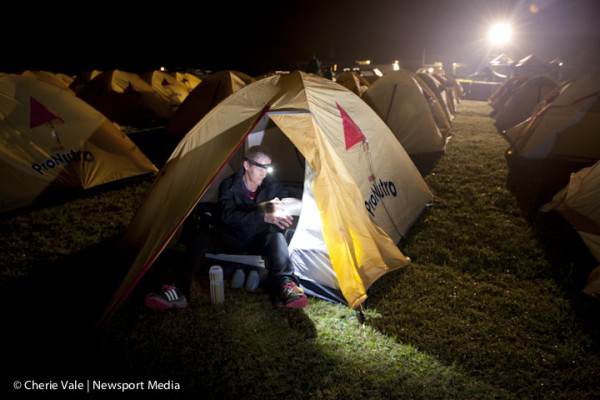 Arriving at the race village was quite a sight. The place was crawling with trail runners from different parts of the country. After a warm welcome from the organisers I found my yellow one man tent. This would be my home for the next 3 days. I unpacked all my goodies and started to get my head ready for three days of tough trail running.

The routine on race day was a familiar one. Wake up at 05:00, mix some electrolyte drink for my running pack, wolf down some breakfast, do a short jog to loosen the legs, and then head to the start line. The atmosphere at the start was electric. There was such a mix of athletes ranging from the elites of the likes of AJ and Bernie to those doing the race in fancy dress. Before we knew it there was the bang of the gun and we were off.

Stage 1 was 34kms with a mix of jeep and single track. Morné and I set off at a steady pace. I started off feeling pretty good but by half way my legs started to become heavy. Morné could see me going into a dark place and just kept encouraging me to keep pushing. We got caught by a mixed team and the first ladies team of Landie and Meg. I had to dig deep and keep running to make sure we didn’t get dropped. We finished day 1 alongside both these teams, and 7 minutes back from the first mixed team of Nic de Beer and Yolande Maclean.

I was worried that if my body was already tired halfway through stage 1, there was a serious risk of me letting Morné down on either day 2 or day 3. I could only hope that my longer distance training runs would be enough to carry me through the next two days.

After a magic massage, loads of electrolyte drinks, a delicious roast dinner and a long deep sleep my body felt ready for day 2.

The second stage was another 34kms starting from Mont Rozier, and beginning with a 10km climb. The route, combined with the warm weather, ensured we were in for another tough day. The first and second mixed teams started fast out the blocks while we opted for a slower and steady pace. We climbed and climbed and climbed some more, with Morné supporting me wherever he could. Not much was said between us. We knew the race was on as we slowly closed the gap on the teams in front of us. We eventually finished the day as the second mixed team, 3 minutes behind the leading mixed team and in top ten of all the teams.

Day 2 was awesome. The trails were magical and I kept drawing inspiration of how fortunate I was to be able to run in such beautiful surroundings and share it with other likeminded people.

The organisers decided to make day 3 a handicap start so I got an extra bit of sleep. This stage was 22kms with 9.5km of fast gradual downhill before the start of the climbs. Morné suggested we push from the beginning. After 12kms we found ourselves back on more incredible single tracks with the leading mixed team in our sights. I gave it my all and ran my heart out. The encouragement we received as we past runners who had started earlier in the day kept driving us forward.

We finished stage 3 as the second mixed team just 90 seconds behind the first mixed team. Our total time over the 3 days ensured that we were the 2nd mixed team and 9th team overall.

AfricanX was a special journey. The interactions with other runners, the organisers, and the opportunity to be running free in the mountains are moments that I will never forget.

I am incredibly grateful to Enduro hub for the opportunity to do the race and to Morné for running alongside me over the three days. His wisdom of knowing when to push and support through the tough times made a huge difference. Not to mention everyone else that was a part of this adventure behind the scenes thank you for your constant support!

This is an event that I would recommend to all trail runners from novice to elite. Bring on AfricanX 2016.