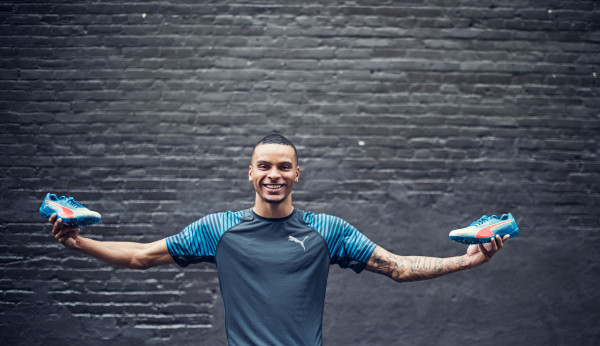 PUMA today announced the signing of Andre De Grasse – a Canadian sprinter who won a 100m bronze medal in the 2015 World Championships in Beijing at only 20 years of age. The reigning NCAA 100m and 200m Champion has a positive looking future ahead of him and will be a great ambassador for PUMA Running and the PUMA brand in the years ahead.

Cape Town, South Africa (7th December 2015) – PUMA is delighted to announce a new endorsement partnership with Canadian sprint sensation Andre De Grasse, the latest PUMA Running ambassador following a spate of other recent signings including Asafa Powell and Jenna Prandini.  He is the reigning NCAA 100m and 200m Champion, and shot to stardom when he claimed a 100m bronze medal at the 2015 IAAF World Championships at only 20 years of age. De Grasse joins a long heritage of PUMA sprint legends that includes Tommie Smith, Linford Christie, Colin Jackson and Usain Bolt, and is is the perfect embodiment of the Forever Faster spirit that is driving PUMA to become the Fastest Sport Brand in the World.

De Grasse will become an increasingly important athlete within the PUMA family as his career progresses. He will feature in running campaigns across all regions in the lead up to the 2016 Summer Games and beyond, and have greater prominence in brand marketing activations as his profile continues to rise. The long-term partnership will see De Grasse represent PUMA in many track & field seasons ahead, becoming even more of a focal point in the post Usain Bolt competition era.

Speaking about his new PUMA endorsement, Andre De Grasse said, “Signing this partnership with PUMA is a major thing for me, in such an important phase in my career. PUMA’s presence and reputation in track & field speaks for itself, their work with Usain Bolt and other heroes of our sport is inspiring to me and I’m very happy to join this family. I have massive dreams for what I want to accomplish and PUMA clearly shares my belief, they will give me great support along my journey.”

Johan Adamsson, PUMA’s Global Director of Sports Marketing and Sports Licensing said, “Andre is an extraordinary young man, both in his athletic potential and determination to become the best in his field. We followed his junior career with great interest and knew he had the talent to make the impact he did in senior competition last year. His progress has been testament to his hunger for success, this combined with his natural ability and talent leaves no doubt he’ll make a huge mark in the world of athletics in the years to come. We’re delighted to have him with us.”

Andre will forego his senior year of NCAA eligibility at the University of Southern California, but will continue to work with USC head coach Caryl Smith-Gilbert while he completes his degree. Coach Smith-Gilbert said, “Andre has risen to the top of the sport very quickly and I’m both happy and proud that USC could be a part of his journey. What Andre accomplished in his short time here at USC was nothing short of amazing, and we look to support him in any way possible as he embarks on his professional career.”

Andre signed with leading US Sports agency, the Doyle Management Group. “An athlete of Andre’s caliber only comes along once or twice in a generation,” said Paul Doyle, Founder & CEO of Doyle Management Group. “Andre is a motivated individual who is poised for a very bright future; I applaud PUMA for recognizing this and putting their resources behind Andre to support him. I would not put a limit on what Andre can now achieve.”