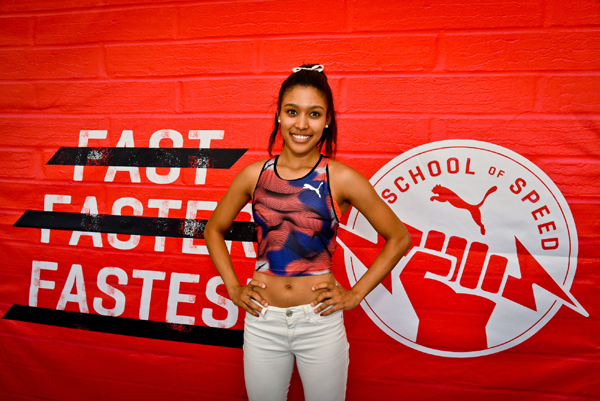 PUMA announced today it has signed endorsement deals with Malesela Senona and Gezelle Magermans. The teenage duo are among the brightest rising stars in South African athletics.

17-year-old sensation Malesela Senona is the Boys U18 National Champion and one of the top ranked young sprinters in the world, having covered the 100m in 10.34 and the 200m in 20.74. He is following in the footsteps of fellow PUMA brand ambassador Henricho Bruintjies, the senior 100m National Champion.

Gezelle, 19, won Gold in the 400m hurdles at the Youth Olympic Games in China and sprinted her way to the 400m Hurdles title at the SA Junior Championships in 2015. The charismatic athlete, who was named GLAMOUR Magazine’s Woman of the Year when just 18, joins a growing list of young woman PUMA athletes including local road running stars Lebo and Lebogang Phalula.
Commenting on her new deal with PUMA, Gezelle said: ”Being a part of the PUMA family is such a huge privilege. I am so greatful for this opportunity, it means so much to me that a brand as powerful as PUMA saw my potential and reached out to me. I would like to say thank you to my agent, family and friends for being my support system.”

Brett Bellinger, PUMA’s Marketing Director for South Africa, said Gezelle has handled the early stage of her career on the world stage with admirable calm and enthusiasm. She also has great appeal on and off the track and to women specifically, making her a wonderful addition to PUMA’s growing list of female athletes.

Regarding Malesela, Bellinger said: “Having Malesela as part of our team at PUMA is great news. We aim to nurture his high levels of performance, so that Malesela shows the way forward for the development of young track sprinters in South Africa and becomes one of our fastest sprinters yet. He exhibits everything a quality athlete needs to succeed and we couldn’t be happier to run alongside him on this journey.”

The signing of Gezelle and Malesela follows just weeks after PUMA announced the launch of the PUMA School of Speed headed by the World’s Fastest Man Usain Bolt. The national series of meets aims to develop athletics talent in South Africa by unearthing the fastest sprinters aged 13 to 19, with Bruintjies on track to oversee the School of Speed events. The first meet took place at TUKS, Pretoria last Friday 2 December 2016. See www.schoolofspeed.com for details of upcoming meets.