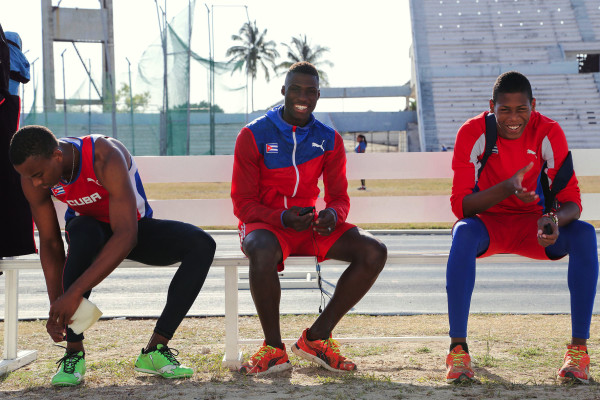 Cape Town, South Africa (28 May 2015) – As PUMA continues to deepen its relationship with Cuba, the Global Sport Brand was proud to announce a new partnership with the Cuban Olympic Committee, that will see Cuban athletes wearing PUMA apparel and footwear in the 2015 Pan American Games in Toronto and the 2016 Summer Olympic Games in Rio.

This new collaboration with Cuban Athletics follows partnerships with Cuban Boxing and Volleyball federations, along with a multitude of athletes including world medalists jumpers Pedro Pichardo and Yarisley Silva and boxers Erislandy Savon and Roniel Iglesias Sotolongo all of whom will endorse PUMA products at all entered competitions.

Cuba serves as a rich and interesting cultural backdrop for PUMA to showcase its brand and product stories. Cuban boxing will be a key focus within a multi million global brand marketing campaign in August and September as PUMA asserts itself in the training space. Cubans have dominated international amateur boxing for a number of years, winning more gold medals in men’s competitions than anyone else. With over 16,000 boxers on the island, Cuban Boxers have won 67 medals in the Olympic Games, 34 of which were Gold.

The Cuba women’s national volleyball team has also been successful, dominating the world in the last decade winning eight times as FIVB World Champions in successive years and three consecutives Gold Medals in 1992, 1996 and 2000 Olympic Games.

“Partnering with the Cuban Olympic Association and various sports federations brings great value to the brand,” said Adam Petrick, Global Director Brand Marketing “The game-changing attitudes the Cuban athletes embody fit perfectly within the PUMA portfolio and we’re excited to expand our relationship with Cuba to become the Fastest Sports Brand in the World.”

With this relationship, PUMA hopes to expand and strengthen its presence in the training category. PUMA will continue to identify new innovations, product designs, and trends in accordance with becoming the Fastest Sport Brand in the World. The relationship with the Cuban Athletic Association, boxing federation, volley ball federation and Olympic committee will recognise outstanding athletes across multiple teams and place a strong emphasis on supporting their training routine.