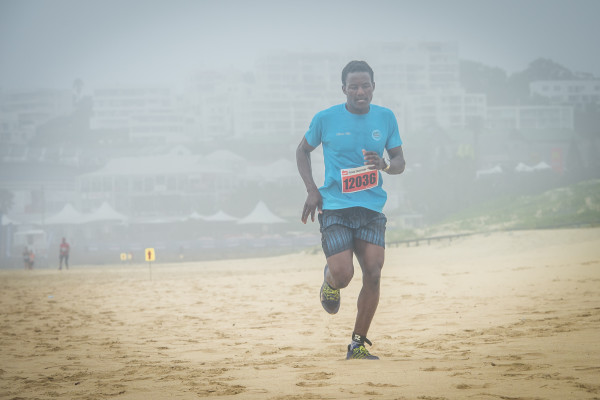 Forming part of the action of South Africa’s largest off road triathlon, the Fedhealth XTERRA, the PUMA Trail Run incorporates the XTERRA trail run routes. Runners could choose between a 6km and 10.2km route that encapsulated the true beauty of Port Elizabeth.

Myuyisi Gcogco was the trail runner to beat in the men’s race, completing the 10.2km PUMA Trail Run in an impressive time of 38 minutes 27 seconds. “Trail running is marvellous, it keeps your muscles healthy and challenges you mentally,” says Gcogco. “Today’s route was tough. The sand was soft forcing me to use more force. When I first started taking part in trail run events I always finished last. Crossing the finish line in first place today was wonderful”. Jade Muller came in second, while Andrew MacKenzie finished third.

Alexia Loizou gave the ladies a run for their money completing the 10.2km PUMA Trail Run in a well-deserved time of 45 minutes 44 seconds. “I’ve taken part in XTERRA in Grabouw, Buffelspoort and even in Durban many years ago,” says Loizou. “I haven’t taken part lately due to injury. It’s great that XTERRA has now come to Port Elizabeth. I decided to enter the PUMA Trail Run as my road back to XTERRA. The race was lovely and very well marked. Next year I’m hoping to take part in the XTERRA Full.” Jane Barnard came in second, while Odessa Perelson finished third.

Siyabonga Kahla conquered the men’s 6km PUMA Trail Run in a lightning fast time of 24 minutes 51 seconds. According to Kahla, he and Myuyisi Gcogco decided to share the events on the day. “Myuyisi and I run for Free Spirit Adventures. My sponsor, Shena told me about the trail run. The route was well marked and really nice.” Trust Obey Mtetwa came in second, while Bryan Allott finished third.

Sonia Dupper was the lady to beat in the women’s 6km PUMA Trail Run, completing the route in 38 minutes 56 seconds. “We made a family weekend of it,” says Dupper. “My daughter took part in the XTERRA Kids race on Friday, while my husband took part in the XTERRA Full yesterday. The 6km PUMA Trail Run was lovely. As a woman it was nice to be able to run in places where we cannot run on our own.” Gail Willmott came in second, while Angie Sampson finished third.

Next on the PUMA Trail Run calendar: