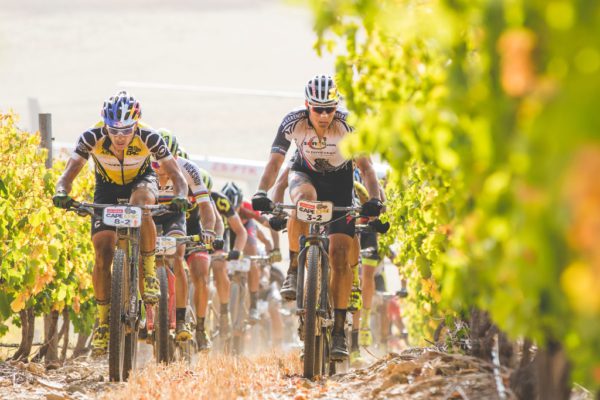 A puncture 20 kilometres from the Stage 4 finish in Oak Valley, on Thursday the 23rd of March, cost Christoph Sauser and Jaroslav Kulhavý the chance of contesting for stage victory. The sidewall cut, to the front tyre of Kulhavý’s bike, ended up costing them 3 minutes and 16 seconds; setting the Investec-songo-Specialized pairing back to third on the general classification with just three stages remaining.

All was going according to plan for the first 90 kilometres of the 112 kilometre long stage from Elandskloof, near Greyton, to Oak Valley, in Elgin, but shortly after the third and final water point disaster struck.

Nico Bell and Gawie Combrinck, riding as Sauser and Kulhavý’s back-up team, did a great deal of the pace-making duties at the front end of the main field in the early phases of the stage. The district roads and head winds combined to produce a cagey first 80 kilometres as most of the leading teams managed to stay together in a large group until the foot of the Botrivier Pass climb.

The climb is familiar to riders of the FNB Wines2Whales, though they ride down the pass rather than up it, and Sauser was expecting sandy sections in the early part of the climb; but he was surprised to find sandy patches throughout, another symptom of the Western Cape’s on-going drought. “I struggle in sand” he said when asked about why he’s looked a little flustered at the water point at the top of the climb. “Everyone struggles in sand, but I struggle more, I don’t know why. But when it became smooth again my legs came back quickly. I was feeling strong on the switchbacks after the water point [water point three] but then Jaro punctured” he continued.

“It was a bad sidewall cut and we had to plug it twice then bomb it twice too. Then the valve core came out and we had to put that back in. And you know with gloves that’s not easy. Nico and Gawie caught us as finished fixing it, and if it was earlier in the stage we would have swapped the wheel, but that would have cost another 45 seconds” Sauser elaborated. 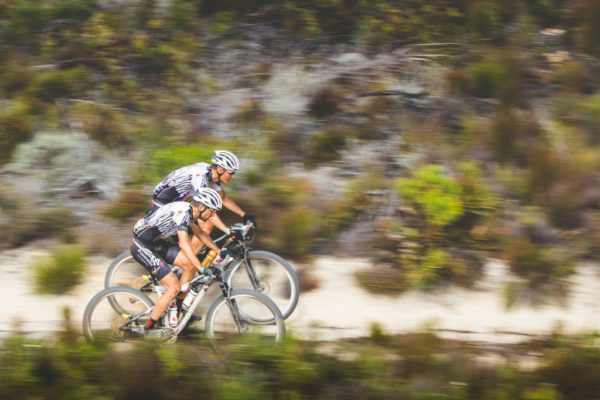 Christoph Sauser and Jaroslav Kulhavý chase back in an attempt to limit their losses after puncturing in the final 20km of Stage 4 of the Absa Cape Epic. Photo by Ewald Sadie/Cape Epic/SPORTZPICS.

The pair then gave chase and managed to limit their time losses from near 5 minutes after fixing the puncture to 3 minutes and 16 seconds to the stage winning SCOTT-SRAM Young Guns. The race leading Cannondale Factory Racing XC team of Manuel Fumic and Henrique Avancini finished third to extend their general classification lead to 2 minutes and 15 seconds, while SCOTT-SRAM MTB Racing moved into second overall, 33 seconds ahead of Investec-songo-Specialized.

The 2017 Absa Cape Epic has been a steep learning curve for the young songo.info riders taking part in the Exxaro Development Category. Thando Klaas and Lorenzo le Roux were fourth on the stage and are currently in third place in the category. But the Songo-Investec 1 team have had their problems. “We had to take the climbs slow, my partner was struggling today” Klaas said after a Stage 4 which featured a brutal climbing filled final 30 kilometres. “But we can push on the flats and the trails so we can try to stay ahead of the guys behind [DMA Absa]” he concluded.

The gap between third and fourth in the Exxaro Development Category is currently 4 minutes and 40 seconds between Klaas and le Roux, and Sean Baloyi and Luke Mashiane, of DMA Absa. Klass and le Roux’s fellow songo.info programme development team, the Songo-Investec 2 duo of Theo Ngubane and Lwazi Ntsakaza are well out of contention for the Exxaro category podium, but the learning and life experiences the Absa Cape Epic offers is of far more importance to them.

Friday the 24th of March’s Stage 5 takes place on the famous trails of the Elgin area and includes 2 100 metres of vertical ascent in the 84 kilometre route. The Investec-songo-Specialized team will need to be on top form to put themselves in a position to win the 2017 Absa Cape Epic, as there are only 272 kilometres remaining in the race. You can follow all the Absa Cape Epic the action live on www.cape-epic.com and watch the day’s highlights on SuperSport 2 at 21:30 tonight. You can also engage with the team by following @songoinfo on Twitter or liking the songo.info Facebook page.