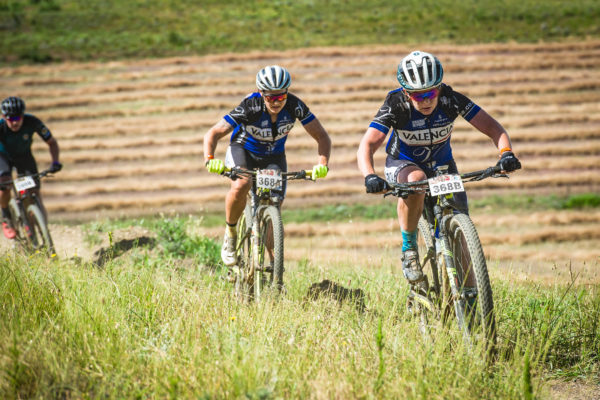 “I knew that it would be a hard stage, but the route suited us well,” said Beukes. “We applied some pressure in the rocky sections. The group stuck together and then Konny’s bike got a flat tyre. From there it was a 60km drag race. Stage Three will be like a one day race for us. It’s basically our last big race of the year so we might as well go all out.”

“I knew that we had a lot of single track coming up on Stage Two,” says Sanders. “I went to the front and set the tempo. We reached the single track first and just held our lead from there.”

“Today was beautiful,” says Mcdougall. “I felt much better than yesterday and the single track suited our riding style. It was smiles all the way. We plan on riding as hard as we can on the last stage.”

In the mixed team race husband and wife duo Jeannie and Martin Dreyer of Team Merchants claimed another stage victory with a finishing time of 03 hours 16 minutes 32 seconds. “We had a phenomenal day,” says Jeannie. “I like to think that my mountain biking skills are improving as I felt more relaxed and was able to enjoy the stage. The route was smooth and free flowing. Everything just seemed to connect well. We’re looking forward to Stage Three. It’s always special seeing the ocean.”

“Even though it’s only 6 seconds, going into Stage Three as the leaders makes a difference,” says Looser. “It’s a mental game. The other teams will have to attack. Both teams are pretty much on the same level. It won’t be easy to make up the difference.”

“Stage Three will be a tough stage,” says Stenerhag. “I try not to think about the prize money until after the race. I was thinking about it a bit during Stage Two though. Overall is what counts.”

The only stage to start and finish at the Oak Valley Wine Estate, “Play Day” saw riders having to complete a 71km route that featured a 1350 ascent. Iconic sections to look out for on route included bridges with names such as Waterfall, Vissie’s Magic, JK’s Edge, Sounds of Silence, Rietvlei, Witklippies 1 & 2, Raka, Swing, Ark, Cobra, Mamba, Boomslang, Pofadder, Jakkels, River Run and the much loved PERI-KROMCO Playpark to mention just a few.

In 2017, Cape Epic was acquired by the IRONMAN group, part of Wanda Sports, to anchor a global portfolio of off-road events and to spearhead the development and expansion of a worldwide series of premium mountain-bike races.

For more information on the Absa Cape Epic®, visit www.cape-epic.com

For more information on the IRONMAN brand and global event series, visit www.ironman.com