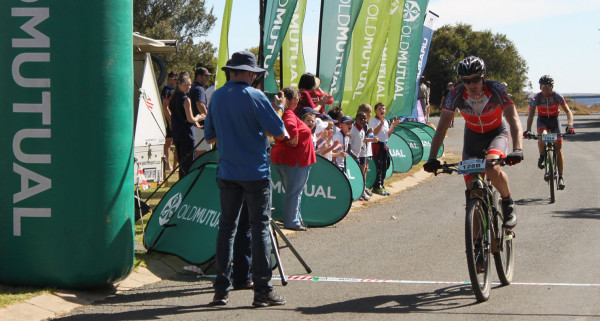 Former roadie Johann Rabie and teammate Gawie Combrinck tore through the open flats and singletrack trails of the eastern Free State to wrest the overall lead on day three of the Old Mutual joBerg2c mountain bike race on Sunday.

Leaving Reitz, the EAI Cycling duo put the hammer down on the 122km stage – the longest of the nine-day event – to take the win at Sterkfontein Dam near Harrismith in a time of 4:14:05.

Their efforts put the defending champions back at the top of the standings with a combined time of 12:21:19.

Overnight leaders Tyronne White and Andrew Hill of Avis Van Rental finished a distant second on the day in 4:18:09 to slip into the same spot in the general classification in 12:25:19.

The Altech Autopage Karan Beef pairing of Pieter Seyffert and Hanco Kachelhoffer rounded out the day’s podium in 4:20:19 to remain third overall in 12:27:38.

Despite the chilly morning temperatures, Combrinck said he and Rabie had felt they had the legs as they hit the dirt after the opening neutral zone through the town.

“We felt good at the start so Johann went hard just to isolate everyone. We knew that forcing everyone to work hard suited us because we’re quite strong on the long stages.”

After 10km, a large lead bunch had formed, and by the first waterpoint 22km later, it had been whittled down to just the eventual podium finishers and The Gear Change duo of David George and Justin Tuck.

By the second waterpoint at the 58km mark, the four teams had a more than four-minute lead on the chasing riders.

They stayed together and extended the gap to more than six minutes on the riverside Jabulani singletrack around 75km into the stage.

As the major climb of the day, Mount Paul, loomed beyond the final waterpoint, Combrinck and Rabie turned up the heat.

“At the end we still had a bit left in the tank,” said Combrinck.

“And with Johann going super hard in the gutter, we managed to get a gap on everyone else.”

George and Tuck were the first to drop off before the climb started, with Combrinck and Rabie riding away from nearest rivals Kachelhoffer and Seyffert on the ascent.

White and Hill caught up to the latter team on the climb and got away from them on the downhill but it was not enough to catch the leaders.

White was however unperturbed as he looked forward to entering his home province of KwaZulu-Natal on Monday.

“We played the long game today and played it smart. Tomorrow we enter Berg & Bush territory, which Andrew and I won last year, so we know the area.”

In the women’s race, Catherine Williamson rode hard in the bunches to help secure another stage victory for her and SasolRacing partner Yolande de Villiers in 4:55:46.

The stage win puts them firmly in control of the women’s category in 13:14:36.

Their teammates Leana de Jager and Johan Labuschagne also remained undefeated in 4:52:43 to cement their spot at the top of the mixed leader board in 13:11:34.

On Monday, riders drop off the escarpment as they cross the Free State border into KwaZulu-Natal, finishing the 121km fourth stage in Winterton.