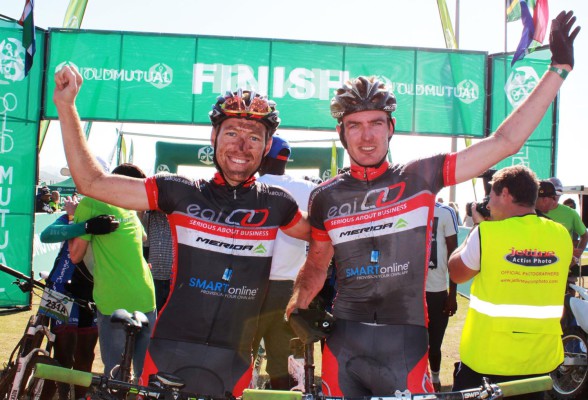 Despite a difficult year, defending champion Johann Rabie is targeting a third consecutive title in the Old Mutual joBerg2c international mountain bike race that gets underway at Karan Beef in Heidelberg on Friday.

The 29-year-old Team Telkom pro has won the nine-day event alongside Gawie Combrinck for the past two years, but this time he will join forces with HB Kruger.

Rabie said his objective for this year’s event, which stretches over four provinces between the south of Johannesburg and Scottburgh on the KwaZulu-Natal south coast, was quite simply “to win”.

Yet, he quickly acknowledged that there would be a certain amount of pressure and the vagaries of competing in a multistage mountain bike race over 900km meant nothing was guaranteed.

“It’s a big goal to win again, yes,” said Rabie, who lives in Malmesbury in the Western Cape.

“But with mountain biking races there are so many factors. It is important to stay out of trouble, healthy and not to injure yourself.”

Rabie was hoping for a change of fortunes after an up and down start to the year.

“This season we have not had the best of luck with some mechanical problems and HB getting sick before the Cape Epic.

“We are hoping our luck will change now,” said Rabie, who was forced to complete the Epic in the Outcast Jersey.

Last year, he placed sixth overall and second in the African jersey before going on to seal his second joBerg2c title.

He expected to work well with Kruger, who finished sixth in the National MTB Series event in Clarens at the weekend. Kruger, who grew up in Pretoria, now also lives in the Western Cape.

“HB did mountain bike racing a couple of years ago, but has been on the road for the last few years,” said Rabie. “I know him well because we have competed before in road teams.”

He said he was looking forward to the joBerg2c and rated his former team-mate and Nico Bell of Team Nad among their toughest competition.

“I enjoy the race and the organisation is also really good. I have always enjoyed tour riding more than the one-day events.”

Rabie added that the changes to the route, which includes a shortened stage four and an all-new day six, would add value to the event.

“We are looking forward to the changes. It’s a very nice route and the new changes should make the racing interesting.”

Britain’s Catherine Williamson, who has won the women’s section in the past, has shifted her focus to the extremely important mixed section this time around.

The versatile 34-year-old, who finished runner-up previously, will join forces with Johan Labuschagne and they will race in the colours of The Bicycle Company-Mitas.

The winners of this category will receive an additional R50 000 bonus courtesy of Lanham-Love Attorneys.