Racing for red … with an eye on yellow 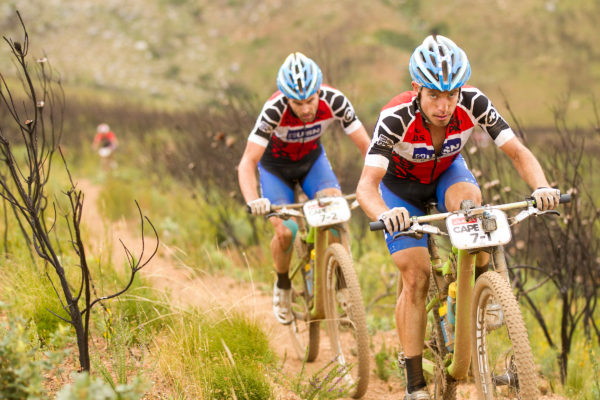 No all-African team has won the Absa Cape Epic since it was launched back in 2004, but Philip Buys and Matthys Beukes want to change that in the not too distant future.

“I think we have matured enough as a team and partnership to set the Cape Epic win as our ultimate goal for the next few years,” Buys says. “We will be disappointed (this year) with anything less than an overall podium and the Absa African jersey.”

The distinctive red jersey in question goes to the first all-African team to finish the event and has become fiercely-contested in recent years.

Former Olympian Buys and his partner Matthys Beukes will be riding under the Team Pyga Euro Steel flag in 2017. Their biggest challengers for the Absa African special jersey are likely to be Waylon Woolcock and HB Kruger (Team BCX), who will bring a compelling combination of experience and youth to the event.

Beukes says: “I’ve had a rough 2016 with injuries that put me back quite a bit, but thankfully I’m almost back to full strength. I didn’t even make the start line in 2016 so in all honesty the first objective is to be on the start in 2017, healthy and fast.”

“Then I’d like to take on where we left off, gunning for an overall podium finish,” Beukes adds in reference to their fifth overall in 2015, when they took home the Absa African jersey. “I’ve done three Epics and won the Absa African title all three times, so it is time to move on and set our sights on yellow (the overall winners’ jersey).”

This year they will face a fired up Woolcock and Kruger in the battle for the red jersey.

In 2016 Woolcock and Darren Lill took the jersey home at the fourth time of trying. Woolcock has been at or near the top of the South African tree for many years and his experience at the Absa Cape Epic should prove invaluable to younger partner Kruger, who pulled out of his first event last year after being felled by a virus.

“The African Jersey is top priority and whatever overall position comes along with that,” Woolcock says. “Last year I was secretly hoping for a top five and we missed that by one place. This year I feel the overall competition is a lot stronger so it’s going to be interesting.”

“We will be aiming for the African jersey this year,” Kruger adds. “With Waylon winning it last year I am very confident that we do stand a good chance to get it.”

Talking about his 2016 experience, he says: “Three days before the Prologue I got quite a bad stomach virus and had to go on antibiotics two days before we started in Meerendal.  I thought I would ride myself into it and out of the sickness, but unfortunately that was not the case. I finished the prologue and started Stage 1 but the virus was not out yet and had to make a call to abandon after that day. So I’ve got quite a lot of unfinished business at the Absa Cape Epic.”

And what do the South Africans think of the 2017 course?

“I like the course … I think it has a good mix,” Woolcock says. “I enjoy the Grabouw area a lot.”

“I’m excited for the stages in and around Hermanus,” Buys says. “And the Grand Finale stage finishing at Val de Vie looks like a fun stage where we can pull off something special again.”

Buys has three stage wins to his name and Beukes two, and in 2015 they rode together and finished fifth overall – winning the African jersey.

“Stage wins are really nice and exciting but thats not the goal,” Beukes explains. “We’ll race for an overall but if the opportunity to grab a stage win comes up we’ll definitely take it.”

Woolcock takes a more conservative view: “To win a stage you either need to be the strongest or take big risks. But if we see an opportunity we’ll take it.”

Buys and Beukes will be on locally-designed Pyga bikes: “Our previous bike sponsor informed us that they wont be continuing their successful partnership with us after achieving what they set out to achieve with the sponsorship at the end of 2016,” Buys says. “This opened up the exciting opportunity for us to partner with a proudly South African bike brand, Pyga. Over the next few years the ultimate goal will be to be the first all African team to win the Absa Cape Epic, and now we will also be on a locally-designed bike.”

And what keeps them coming back? “It’s the biggest MTB stage race in the world, the Tour de France of mountain biking,” Beukes says: “So this is the biggest possible stage for us to perform on and its in our backyard.”

Woolcock smiles: “Good question. It’s a gruelling event and lots of sacrifice is required to compete at this level … I think it becomes addictive.”

Also in the field are NAD Pro’s South African pairing of Nico Bell and Gawie Combrinck, veterans of the local scene and both with several Cape Epics under their belts. They will, however, be riding in support of Investec Songo Specialized’s Christoph Sauser and Jaroslav Kulhavy – potential overall winners – and may have to sacrifice their own ambitions to helping the team leaders. If, however, they are not called on to hand over a wheel or help fix mechanicals the South Africans will expect to be in the Top 10 and also scrapping for the red jersey.