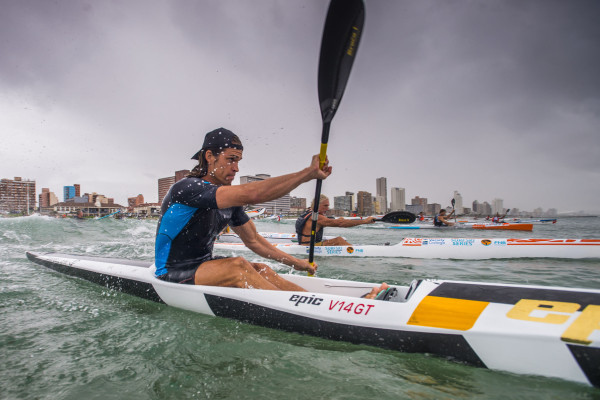 Durban – Despite the rain, Friday evening’s Borland Surfski Challenge presented by Marriott, race two of the 2016 Varsity College FNB Marine Surfski Series, saw Durban serve up another memorable set of ocean conditions for the over 250 enthusiasts who took up the challenge with Matt Bouman claiming his second consecutive race win while Nikki Russell won the women’s race.

Epic Kayak’s Bouman enjoyed a tough tussle with Herbalife’s Wade Krieger and Gene Prato in the series opener in week one and once again charged home ahead of the pair second time around, this time with Prato getting the better of Krieger after the latter got himself stuck on the shark nets.

“I’ve been training really hard and was feeling even better this week so I went out a bit harder than last week this time around and managed to get away from the guys a bit earlier,” said Bouman.

“It was another good race though! We’re really lucky here in Durban; there is just so much talent in this little town of ours!

“Wade (Krieger) is going really well, Hank (McGregor) will be back soon I’m sure and then it’s been really great to see Grant (van der Walt) back on the water and hopefully once his board exams are done then he too can come play nicely with us again because his talent really is freakish!

“The series is also such a good way to build towards the international season!” he added.

The relatively small surf and flat ocean, together with a ten knot wind, made for gentle conditions that were once again enjoyed by many of Durban’s ever-growing surfski community.

The depth in Durban’s surfski talent continued into the women’s clash with a first race win in her debut showing at this year’s Marine Surfski Series for Fenn Kayaks’ Russell was hotly followed by a bumper contest for second, third and fourth position.