Rain, wind and running at the Richtersveld 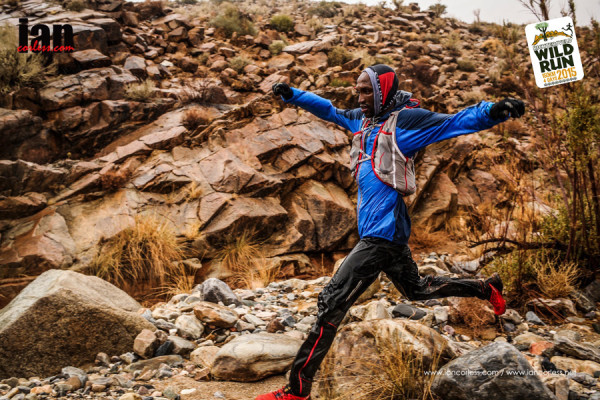 Thabang Madiba on the way to first place at day 2 of the Richtersveld Wildrun™. Copyright Ian Corless

Day 2 of the Richtersveld Wildrun™ took place in freezing conditions as runners made their way across approximately 35km of mountainous desert terrain through driving rain and wind. It was no ordinary day in the desert and the double rainbow that greeted runners at the start of the day’s running was indication of just how extraordinary this kind of weather is in this part of the world.

Double Olympian gold medallist, James Cracknell arrived early on Wednesday morning from the United Kingdom after being delayed due to previous commentating commitments in Poland. He did not have much time to recover from his travels though as he was off and running an hour after his arrival, joining Thabang Madiba, Dayle Wheeler, Katya Soggot and Nikki Kimball in the final batch start of the day.

Madiba took off like a rocket and after five kilometres he had already opened up a three minute lead on his closest rivals. At the first official checkpoint he had overtaken all the runners who started ahead of him and he sped off on a mission to the finish. If not for the slight route change because of the change of campsite due to inclement weather, his finish time of 3:14:03 could well have been faster than Bernard Rukadza’s time at the same stage in 2014.

The second male and first two females crossed the finish line approximately 11 minutes later when Dayle Wheeler, Katya Soggot and Nikki Kimball crossed the line hand-in-hand in 3:33:35 with James Cracknell coming home not long after in a time of 3:41:56. Karoline Hanks was third lady home in a time of 4:03:23.

After a tough day in the office for all runners spirits are still high, with weather conditions steadily improving and the promise of a little bit of sunshine on day 3. Click here for full results and find more photos in Dropbox at https://www.dropbox.com/sh/0s2k43u2cnmhf1v/AADk8YAitKvYMczLcrmuYvmBa?dl=0.