Rebello and Neethling Wrap up the RECM Knysna 200 Titles 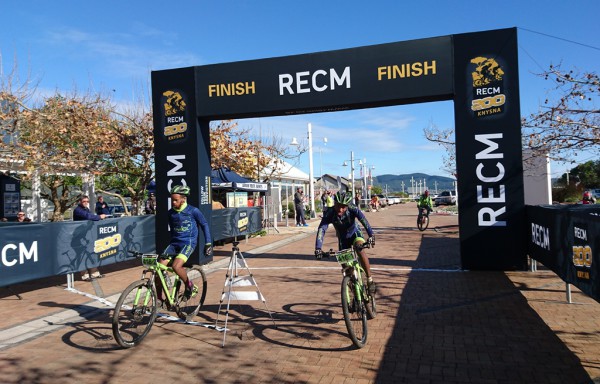 6. Ian Jantjies and Brandon Williams of the Knysna Sport School crossing the line to claim victory in the Open Men’s race. Photo by: Seamus Allardice.

The third and final stage started in the heart of the Knysna Forest, at the Harkerville Forest Station, between Knysna and Plettenberg Bay. The early kilometres of the 56km stage were along gravel roads through the forest, before traversing a high ridgeline which offered riders spectacular views over the azure Indian Ocean. The racing was fast and furious and the lead bunch knocked off the 15km to water point one and the first section of singletrack at a frantic pace. Rebello, Nico Pfitzenmaier and Shan Wilson were once again at the forefront of the pace making duties and entered the Harkerville Red Route singletrack together.

A crash for Pfitzenmaier meant Rebello was able to briefly distance both Pfitzenmaier and Wilson, who was behind Pfitzenmaier at the time of the crash. The crash didn’t set Pfitzenmaier back though and he was soon on Rebello’s wheel again. As the leaders past water point two at 40km, with only a long descent and a cycle path blast separating them from the finish, they were still within sight of each other. But as his older rivals tired Rebello surged ahead and soloed to the finish, as he had done on the previous two stages, to claim his third stage victory of the race. The result secured a Rebello a dominant general classification victory, by 36 minutes, over Wilson. Pfitzenmaier’s terrible luck with punctures on stage two meant he was relegated well down the general classification, allowing David Cooke to claim the final Solo Men’s podium position after three stages.

Neethling, like Rebello, was utterly dominant throughout the RECM Knysna 200. She approached the race as a series of high-tempo training rides and had challenged herself to race the men as hard as possible. It was a goal she achieved with aplomb finishing alongside the leading men’s team on every stage and achieving a remarkable fifth position overall. Neethling brushed off a crash on one of the bridges in the Harkerville Forest, which left her with a nasty gash below the knee, to race to her third stage victory of the race on stage three. The Team Dorma rider’s general classification time of 8 hours 37 minutes and 08 seconds was enough to ensure victory over second placed Solo Woman Carmen Buchacher by 18 minutes. Closing out the Solo Women’s podium was Nina Hind who raced to her third successive third place finish, and in so doing holding off Katja Steenkamp for the hotly contested position.

The heart-warming story of the RECM Knysna 200 was the tale of the Knysna Sport School development team who claimed the Open Men’s team category victory. Going into the race Ian Jantjies and Brandon Williams were only concerned with defeating their fellow Sport School team of Nelson Sibale and Vernon Moos, but they raced with such enthusiasm and dedication that they achieved that and more. The sight of Jantjies and Williams collapsing in exhaustion as they crossed the finish line became one of the iconic scenes of the RECM Knysna 200. Their category victory was a well-deserved one and one that filled everyone associated with the Knysna Sport School and Garden Route Events with immense pride.

To view the full results from the 2016 RECM Knysna 200 please click here. All the images and daily highlights videos from the race are up on Facebook at Garden Route Events, and be sure to like the Facebook page or Follow @recmknysna200 on Twitter to stay updated on the 2017 RECM Knysna 200 race dates and all the news from Garden Route Events’ other up-coming events.