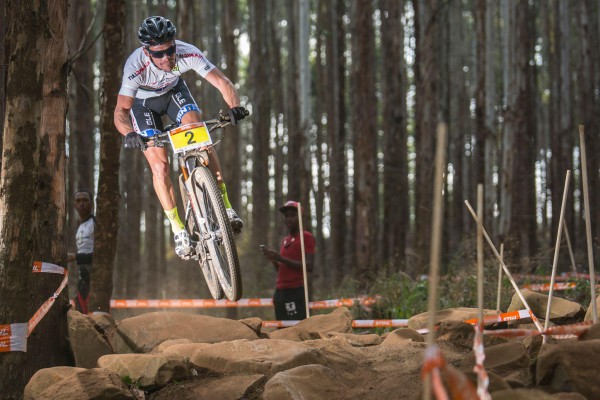 Stellenbosch – The student town of Stellenbosch is all set to host the 2015 Stihl SA MTB Championships presented by Subaru Cape Town/Novus Holdings this weekend with the country’s top cross country and downhill mountain bikers set to stake a claim for their respective discipline’s national colours.

Cycling SA has noted the highest level of pre-entries recorded in the last five years and with late entries still to be factored in, the overall tally stands at 293 participants with a recent record of 245 pre-entries for the XCO and 48 for the DHI.

Racing gets underway on Saturday with a variety of cross country clashes with the likes of Olympian Philip Buys (Scott Factory Racing powered by LCB), defending national champ Rourke Croeser (Full Dynamix/USN) and recent Stihl SA MTB Cup Series winner Alan Hatherly (Kargo Pro MTB), amongst many others, set to lock horns in the elite men’s clash that gets underway at 14h00 and is preceded by the elite women’s race at 10h00.

While Hatherly has enjoyed good form of late, the youngster will be up against it as his more experienced counterparts look to not only make the national title their own but earn vital UCI points ahead of next year’s Olympic Games in Rio de Janeiro.

Women’s defending champ Mariske Strauss (Novus OMX Pro Team) has sadly been forced out of this year’s national showdown due to an ankle injury that has plagued her for the better part of the 2015 season.

Strauss’ absence may well open the door for her Novus OMX Pro Team teammate Cherise Vale, who is another to have enjoyed a good run of form of late, while Olympian Candice Neethling (Free Cycles/Pam Golding Properties) and Under-19 rising star Bianca Haw (Specialized SA/Red Bull) will also be eyeing a positive national champs showing.

Sunday sees competition shift to the trails of the renowned Jonkershoek mountains as the adrenalin seeking downhill stars go head to head.

March’s devastating fires that ripped through the Western Cape region left organisers having to build a near brand new course, something that has Odendaal excited ahead of this weekend’s action.

Despite the new layout, Odendaal is confident he will be able to call on his healthy racing experience in the region to safely navigate the new course and along with his recent good form should prove to be the man to beat.

Odendaal is however unlikely to have things all his own way as the likes of Sam Bull (Sportsnut DH Team) and Stefan Garlicki (Investec/Solid Reverse Factory Racing) also look to stamp their authority on proceedings and challenge for national honours.

Bull and Garlicki have returned from stints in Europe where they would have been racing against some of the best riders in the world. The experience gained there should prove to be invaluable when the national championships get underway on Sunday.

While the atmosphere of the world class race village and top end racing is set to be hot, the cold front expected to hit the Western Cape this weekend may add an extra element to proceedings with the cold and wet conditions being added challenges competitors will have to overcome in their effort to reign supreme.

Mountain biking fans can tune in to the live streaming channel to watch all the action unfold in the Elite Men and Women’s XCO races on Saturday as well as Sunday’s DHI race via http://www.cyclingsa.com/communitywhile more information can be found at www.cyclingsa.com