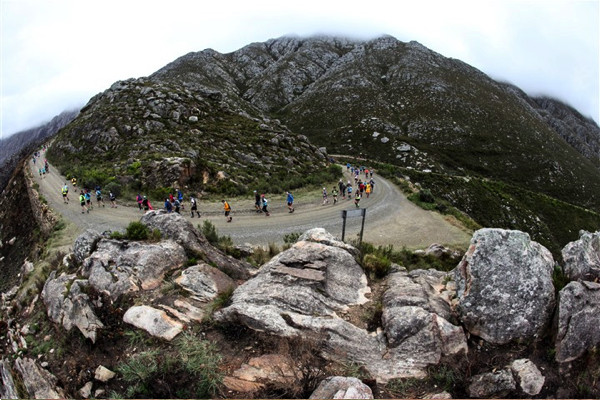 Challenging terrain and stunning scenery help make the Fairview Dryland Traverse one of the most complete trail-running stage races on the calendar. The fifth edition gets underway on Thursday.
Photo credit: www.oakpics.com

Endurance runners are known for their ability to train hard, race hard and party hard. And that’s why the Fairview Dryland Traverse, a four-day trail-running stage race, which starts this week, has attracted a record field of 300.

No other trail-running stage race has the complete appeal of the Fairview Dryland Traverse, which starts with an underground prologue stage in the Cango Caves, crosses the majestic, iconic Swartberg Pass, passes alongside the Raubenheimer Dam and finishes at the De Hoek Mountain Resort. It’s essentially a highlights tour of the Karoo, and includes a now legendary themed party on the final night.
While there’s a strong focus on the fun factor, the Dryland Traverse remains primarily a race, with prize money and podium call-ups for the top performers on each stage and overall.
In the Men’s team event, last year’s winner Mauritz Janse van Rensburg (with Eddie Lambert) has teamed up with 2014 Solo men’s third place finisher, Johnny Young, in what should be a strong pairing that will start as favourites in this division, while the absence of 2014 Solo men’s winner, Ettiene Plaaitjies, will open the door for a new Solo men’s champion to emerge.
Last year’s Solo women’s winner, Leilani Scheffer, has returned to defend her title, but with 60 entrants in this category for 2015 (almost double last year’s number), is sure to be under more pressure.
Prodigal Khumalo, runner up in the Solo category last year and a former Comrades Marathon gold-medallist, will return this year, teamed up with Zisandele Mkhize and will aim for podium success in the Mixed Category. Their team entry has been sponsored by 32GI, the official supplement partner of the Dryland Traverse.
As part of Dryland Event Management’s quest to develop talent, it formed the Fairview Dryland Academy, in conjunction with Fairview Wine and Cheese, which helps support underprivileged runners that show commitment and podium potential in the Klein Karoo region.
The Fairview Dryland Academy has made six Dryland Traverse entries available for deserving local Oudtshoorn athletes this year – they are: Francois Massaqua and John April (team entry with accommodation) and Jason Jafia, Arie Pietersen, Piet Fortuin and Gershwill Jacobs (all solo entries with accommodation). Jacobs is the 2012 winner of the Dryland Traverse, who, along with his fellow Dryland Academy entrants, will be adding a good measure of depth to the Solo men’s race.
With 35 entries, the Mixed team division was the biggest team category at the 2014 Dryland Traverse and it’s grown to 46 entries this year; while women make up half the field this year with a total of 150 entered in the Mixed teams, Women’s teams and Women’s solo categories.
“The ideal mix of challenging routes, amazing scenery, good catering and a fun atmosphere remains our objective with the Fairview Dryland Traverse,” said Bernard le Roux of Dryland Event Management.
“We believe that we’ll achieve that once again and are looking forward to welcoming a record number of runners this week. The fact that we have so many returning entrants confirms that our formula is a good one. Many running events use the same routes each year. However, we feel that by changing our route annually, there’s always a fresh incentive to return.
“The Fairview Dryland Traverse has been voted ‘Race With The Best Atmosphere’ in the Runner’s World annual race survey for the past two years. There will be an 80s-themed party on Saturday night, which should help keep us in the running for that title again,” smiled Le Roux.
In addition to the regular racing categories, there’s also a ‘Dryland Reverse’ prize for the slowest runner in the event and Mafuta (90-99kg) and Makulu Mafuta (100kg-plus) sub-categories aimed at the larger competitors.
Entries have closed, but for more detailed event and route information, visit www.drylandtraverse.co.za. For regular race updates, follow @FairviewDryland on twitter and for photo galleries, find Fairview Dryland Traverse on Facebook.
Fairview Dryland Traverse 2015:
Thursday 5 November: Prologue – 8km
Friday 6 November: Stage 1 – 27km
Saturday 7 November: Stage 2 – 26km
Sunday 8 November: Stage 3 – 14km
Endurance runners Fairview Dryland Traverse featured Running Stage Race 2015-11-04
Tiaan Pretorius