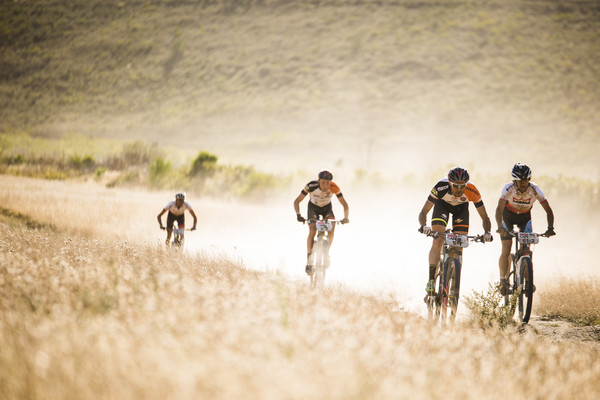 Two fierce “races within the race” are adding extra intrigue to the 2015 Absa Cape Epic.

The first is the battle for the red Absa African special jersey, which has been worn by three teams and changed hands at the finish of each of the past three stages.

The other is the race for the Dimension Data Masters category, with two top teams finishing together again on Friday after their relentless battle illuminated a rugged Stage 5.

On Friday was the turn of South African Darren Lill and Waylon Woolcock (RED-E Blend) to win back the red jersey when they rode the 121km course brilliantly to finish third overall. They took it from Philip Buys and Matthys Beukes of Scott Factory Racing, who won Thursday’s Stage 4 overall.

Lill said afterwards: “I was very happy for them because it is great for South African riding, but I have the feeling that they paid for it today.

“I was elated and relieved when we crossed the line. Relieved that we had no mechanicals, and elated because we finished on the podium and took back the red jersey,” added Lill. “Our main focus going into the race was the red jersey, but we are happy to pick up a few podiums along the way.”

Youngsters Rourke Croeser and Travis Walker (USN) had worn the red jersey for the first two stages but dropped to fourth among the all-African teams.

The Dimension Data Masters category is turning out to be a thriller, with BETCH.nl Superior’s Dutch/Brazilian combination of Bart Brentjens and Abraao Azevedo going toe-to-toe with South Africans Nico Pfitzenmaier and Robert Sim (Dorma/Robert Daniel) on stage after stage.

On Friday it was the turn of Brentjens and Azevedo to win, but only by less than half a second in a sprint finish. Pfitzenmaier and Sim won the previous two stages but also by small margins.

The South Africans had, however, lost a little ground during the early stages and are one minute and 26 seconds back in the overall standing. Two days of red hot racing lie ahead.

“This is by far the most draining Epic ever for me” said Pfitzenmaier. “Physically and emotionally, the battle with myself and with the team we are chasing is so intense … I just don’t know what more we can do to get that leaders’ jersey.”

The story of the Grand Masters category is a very different one, with Meerendal BIXS KTM’s Barti Bucher (Switzerland) and Heinz Zoerweg (Austria) extending their lead to 53 minutes overall. On Friday they finished a little more than four minutes ahead of second-placed Greg Anderson and Andrew Mclean (Ascendis Health).

The Mixed category is also being dominated  by one team, ETIS’s Peter Vesel of Slovenia and Ivonne Kraft of Germany, who have a 31-minute overall cushion over South African Nizaam Essa and Briton Catherine Williamson (Asrin Cycling) after winning by six minutes on Friday.

Vesel said afterwards: “Today was so challenging for us. We had a flat tyre, then I crashed and hurt my arm. Luckily it’s not too bad.

“I am feeling so happy to be in the overall lead, but I can’t think about victory yet because there are still two days left and we have seen how unpredictable the Epic can be.”

And in another commanding performance Phillimon Sebona and Jan Motshioa (Exxaro PWC) extended their lead in the Exxaro special jersey race to one hour and 45 minutes. Rilamulele Gadabeni and Tovhawani Mavundavhi (Exxaro/EOH) lie second, and will probably have to settle for that when they ride into Meerendal Wine Estate and the finish on Sunday.