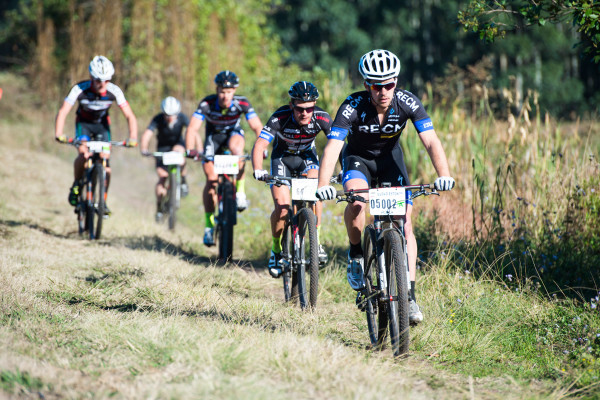 It was a great day for Team RECM’s James Reid who claimed his maiden title against a strong field at the 2015 Illovo Eston MTB Challenge on Sunday, 2 August. Anthony Grote/ Gameplan Medi

Eston – In what turned out to be one of the most competitive fields in years the 2015 Illovo Eston MTB Challenge saw two new champions crowned as recent national cross country champions James Reid and Junior women’s champion Frankie du Toit proved too strong for their respective fields on Sunday.

Reid, who has won the 40km half marathon at Eston in the past, was able to back up his recent form when he turned the tables on defending champion Rourke Croeser as he out-sprinted him to the line in a replica of the 2013 dice however it was the Team RECM rider who came out on top in 2015.

It was a tough start to the race for Reid however once he managed to get going and get into the race he knew that it was going to come down to the rider with the best game plan and it was the Western Cape resident who managed to execute his tactics the best.

“I didn’t feel great early on,” he explained after his win. “The track was so smooth and so fast and there was quite a head wind coming back so I knew that tactics would play a big part.

“I knew that the race was pretty much to the end of the dam because once you on the field no one is going to come around you.”

Having been on the losing side of the sprint in 2013 Reid was happy to have got one over his rival Croeser and it seems that the rivalry between the two is starting gain status with the rest of the pack having to sit back and watch the pair slug it out.

“I really respect Rourke (Croeser) as a racer and we tend to lift each other’s standards when we race and for him and I to dice every weekend it can only lift the game.

“I was happy to come right today and in KZN you can see how we produce the riders we do with such strong fields at these sorts of races,” Reid mentioned.

Croeser echoed Reid’s sentiments when commenting on how the riders had go about the race with tactics playing a major role in their race with it being such a fast event.

“I always knew that I was going to have to be tactically sound today and get in front at the end because of the block from the 40km and 18km riders but all credit to James, he rode a top race.

“I am super happy for Travis (Walker), who is on great form at the moment and it bodes well for us as a team leading into the end of the season with the Cape Pioneer and Wines2Whales,” the Full Dynamix/USN star proclaimed.

The women’s race was hotly contested for the first half of the race with e-Team/Time Freight’s Frankie du Toit powering her way to her maiden Illovo Eston MTB Challenge title with challenger Candice Neethling dropping off the pace and out of the top five.

It was a dominant display from the young KZN star who was happy with the way things went following her interval to get rid of Neethling.

“At about 30km I put in a burst which worked and I managed to get away from Candice and I never saw her again so I was happy with that,” Du Toit said with a smile. “There was some incredible single track but unfortunately we got stuck behind some people quite often.

“Despite that the race went according to plan for me and I wanted to see how strong the other ladies were and I just went out to race my own race.

“I said that if I could put in a move then I would and it all panned out exactly how I wanted it to!” she beamed.

The win on Sunday could catapults Du Toit into third place on Quattro ROAG Series leader board with just three races left in the series whilst Team Thule’s Tyronne White should make a charge into second spot on the men’s leader board behind current leader Team TIB’s Andrew Hill.

The 40km aQuellé Half Marathon was dominated by Mauritian star Henry Mayer who romped his way to a five minute victory over Matthew Makrinos in second and Dylan Howard in third place.

The ever-popular 18km STIHL Tala Family Ride provided young and old with some entertaining riding as the young Devon Baird was the fastest boy whilst up-and-coming star Sabine Theis was the fastest girl and managed to finish third overall in the race.

More information can be found at www.illovoestonmtb.co.za.