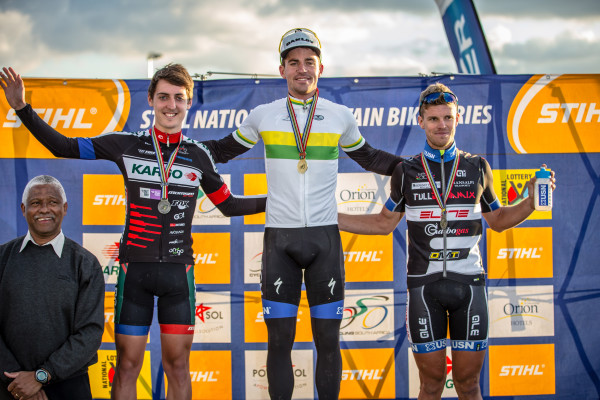 Stellenbosch – It was a tale of two races at the 2015 Stihl SA MTB Championships presented by Subaru Cape Town/Novus Holdings with James Reid snatching victory in an end sprint whilst Cherie Vale put in a commanding performance to win the ladies cross country title on Saturday.

In a race that ebbed and flowed Reid did not have the most favourable of starts and found himself languishing in the bottom half of the top 10 which was not the start that he wanted.

“I had nothing at the beginning of the race to be honest,” Reid said following his win. “I just wanted to stay in touching distance of the guys at the front because I could see that they were having a real scrap up front!”

The 22 year old Team RECM rider knew that if he kept his pace up and remained calm that he would have an opportunity to get in the mix and once he did he kept on increasing the pressure on his fellow riders.

“It wasn’t actually a case of me speeding up I think the guys at the front slowed down which helped me get amongst them.

“On the fifth and sixth laps of the race I started to try and open it up a bit and Alan (Hatherly) and Travis (Walker) were the guys that were with me – although Travis was a bit behind us.

“I knew that if I managed to get onto the grass first at the end then I would have a really good chance and that is how it happened!

With the win and the 110 UCI points that were on offer Reid’s UCI ranking should increase with the win from his current position of twenty-eighth.

It was also a remarkable performance from Hatherly who is an Under 19 rider who finished in a respectable second place just one second behind Reid.

The elite ladies race was dominated by 2014 runner-up Cherie Vale who coasted to the national cross country title on Saturday and the Western Cape local was delighted by having the national crown wrapped up in her own back yard.

“It really hasn’t quite settled in yet to be honest!

“Winning in Stellenbosch was great and having so many people out there supporting definitely added to the win.”

Despite the absence of the defending champion Mariske Strauss it was still a race that Vale was not quite sure about heading into it however with the support of her Novus/OMX Pro Team she managed to get herself in front and stay there.

“The victory is a little bitter-sweet because Mariske wasn’t riding but I knew that I had to go out hard and really push on the climbs and keep myself as focused as possible with the mud around the course.

“The area drains really well but there were some areas that were a bit muddy.

“Once I got started I knew what I had to do and it has been a really good build up for me with the help of my sponsors.

“I have never won an award like this so it is really special to have won!” an elated Vale added.

With a block of international racing this year under her belt Vale feels that competing against the best in the world was a great way to prepare for the national championship.

“Riding overseas has been a great experience for me this year,” she mentioned. “There are a lot more riders in the race and the standard is high.

“You can’t be off your game and so that experience has made me a better rider for sure.”

Vale is currently ranked 40th on the UCI rankings and following her win she should move up the rankings.

The national cross country title became the fifth national title won by Frances du Toit in 2015. The young rider dominated the Junior Women’s race as she cruised to a three minute win over Genevieve van Coller and Kirsten Louw in second and third respectively.

Mountain biking fans can tune in to the live streaming channel to watch all the action unfold in the Elite Men and Women’s DHI race on Sunday via http://www.cyclingsa.com/community while more information can be found at www.cyclingsa.com