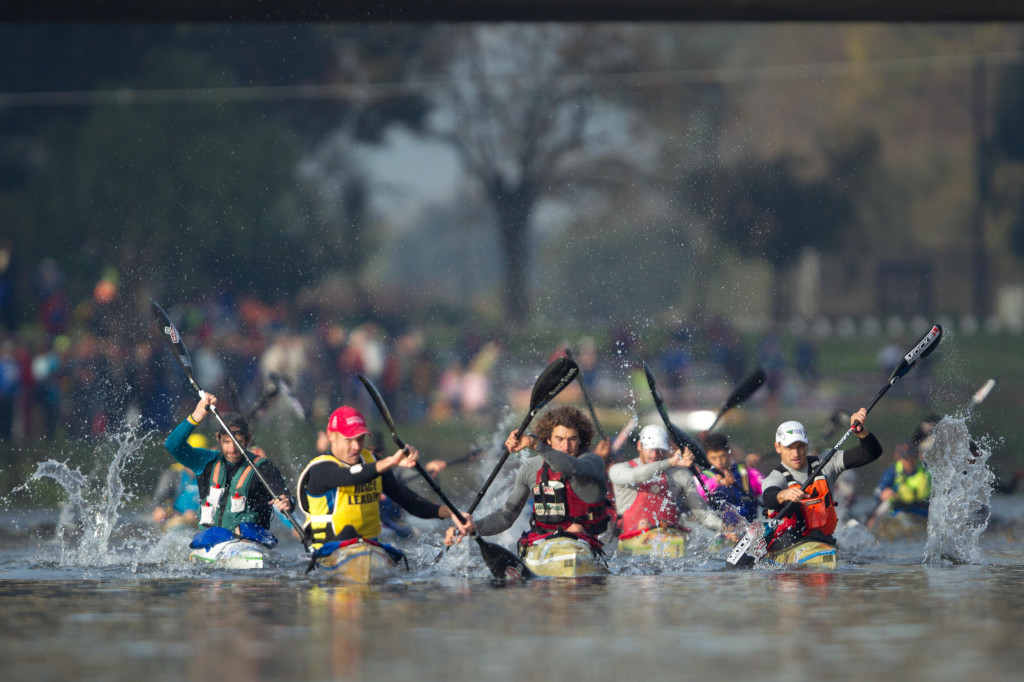 Lance King (left) leads out Andy Birkett (right) and the rest of A batch at the start of the first stage of the four day long Berg River Canoe Marathon on Wednesday. – John Hishin/
Gameplan Media

Zonquasdrift – A bright but chilly start turned into a nightmare for defending Berg River Canoe Marathon champion Lance King who laboured to fourteenth place overall following an early swim after the only short portage of the day, a day which belonged to Graeme Solomon and Abby Adie who claimed the men’s and women’s race leader’s yellow bib respectively ahead of the grueling 48km second stage on Thursday.

The day got worse for the Duxbury Network star who battled to overcome his early setback and explained that it was a day to forget following his boat-length advantage at the start.

“The highlight of my day was starting a boat-length ahead of everyone else,” a despondent King said shortly after getting off the water. “I fell out at the first portage and the day just got worse from there. It was a long, long day.”

Following the unfortunate swim early in the race King was unable to get himself back to the main field with the cold playing havoc with his health as he attempted to work his way back to the front.

“It was a really tough day out there for me today,” King commented.

With such a strong men’s field going into the day, the lead group was whittled down as the day laboured on and it was a group of four that finished together with Solomon leading the diamond over the finish line with triple Dusi Canoe Marathon champion Andy Birkett and SA Surfski Champ Jasper Mocké rounding out the podium with surprise package Simon van Gysen finishing a close fourth.

Having one Berg River Canoe Marathon victory under his belt already, Solomon has been in this situation before and he is all too aware that there is a lot of racing still to go.

“It is a long way to the sea from here and after the first day you just want to be in touch with the front guys. It is nice to come across the line first but it doesn’t mean much and it will be a big race tomorrow to the end,” the Bamboo Warehouse paddler said.

With one of the strongest fields the Berg River Canoe Marathon has seen in its 53 year existence, Solomon is aware of the threat that the men around him pose going forward after the blistering pace set by the front-runners off the start-line on stage one.

“It was a very fast pace out there to start with but that was to be expected with the likes of Andy Birkett, Jasper Mocké and that lot, they are all world champions in their own right.

“It was a very fast start and a quick first 30 to 40km’s until the front group eventually broke down to four which then saw the pace settled down a bit towards the end,” the Berg veteran said. 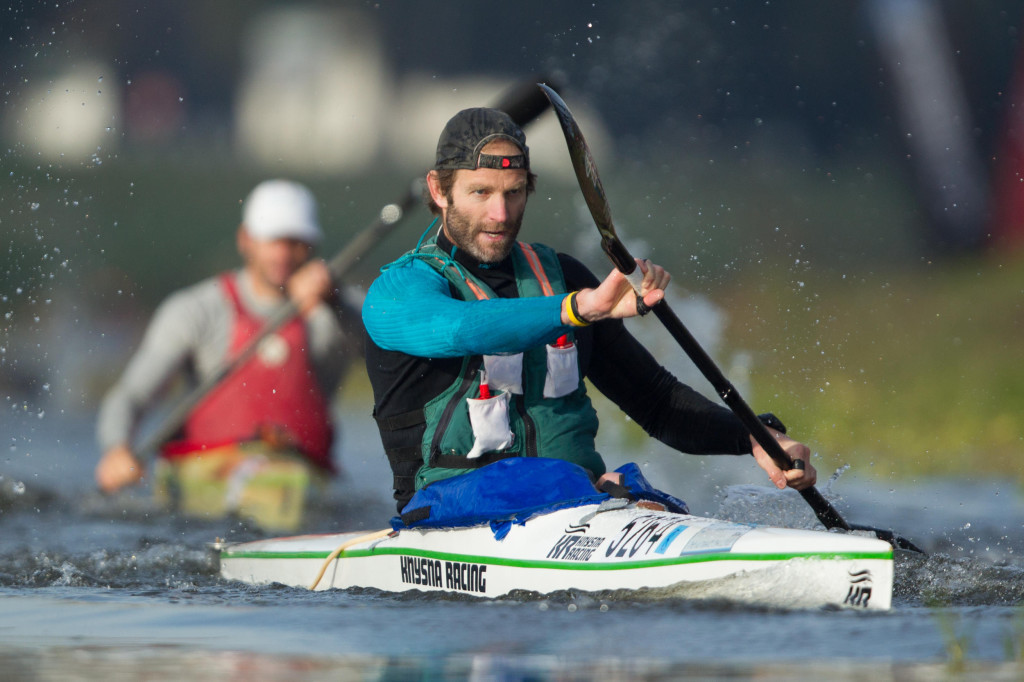 Graeme Solomon led a front bunch of four across the finish line at the end of the first stage of the four day long Berg River Canoe Marathon on Wednesday. – John Hishin/
Gameplan Media

After throwing his name into the contenders ring at a fairly late stage, current Dusi Canoe Marathon champion and second place finisher on Wednesday, Andy Birkett was well aware of the pressure that was exerted at the front of the race but was happy that he was able to stay with the front guys the whole way through.

“It was a great race out there today. We started with quite a big bunch out there leaving Paarl, there were about six or seven boats which put everyone under bit of pressure until we could whittle it down to four boats.

“After that it was nice and relaxed and we worked as a group and paddled into the finish together and I am chuffed that I made the distance and am looking forward to tomorrow.

“I am stoked just to be on the front bunch, that was my goal going into the day and so I am really stoked that it has all gone to plan,” a happy EuroSteel star mentioned.

Great grandmaster competitor Lee McGregor – father of nine-time Berg winner Hank McGregor – claimed a staggering eighth place in 2013’s race and before the starter’s gun fired on Wednesday morning, he was adamant his return in 2014 would be to put in an even more remarkable and improved performance.

McGregor managed exactly that on the opening stage as he crossed the line in seventh place and the day then got even better shortly afterwards for the diesel engine of the field as he received news of his first grandchild’s arrival after Hank’s wife Pippa gave birth to young Thorsten McGregor at midday on Wednesday.

In the woman’s race, pre-race favourite Abby Adie claimed a sizable first stage lead of nearly eight minutes, a positive start in her effort to claim one of the few titles on the South African canoeing calendar that she has yet to stake a claim for during her already illustrious career.

The Best 4 Healthcare/Kayak Centre young star made a telling break one third of the way into the opening stage after she, twin sister Alex Adie and Western Cape surfski paddler Bianca Beavitt set a steady pace up front together during the first hour and a half of the four day clash.

“I don’t think I could  have asked for a better day today!” said a very happy Abby Adie afterwards.

“It was a really long day and I just looked to break it down into little bits. Early on I stuck with a couple of the other girls but then when I managed to pull ahead at about 27km, nobody came with me so for the majority of the day it was a really long and lonely paddle.

“Hopefully tomorrow I can get through the tree blocks cleanly and then it will be nice to have some of the guys’ waves to work with,” she added.

A newcomer to the Berg, Beavitt looked to use the little local knowledge she had to her advantage and bravely hung on to claim second place while the fast-returning to top form Alex Adie rounded out the day’s women’s podium.

“I was really happy with how my day went. I didn’t have any swims and even though I made one or two little mistakes, being relatively new to rivers again, I was really chuffed,” said Beavitt.

“I only really decided to do Berg about six weeks ago. I had initially looked to do marathon but then exams got in the way and so i chose to do Berg instead and so to finish up second after the first day, I’m really pleased with.

“It’s by no means a done deal that Abby will win it either. There are still three very long days and well over hundred kilometers to go so lots can still happen!” she added determinedly.

2013 runner up, Kirsten Penderis worked closely together with Berg novice Lauren Felgate as the pair finished together in fourth and fifth place respectively but will have to work extremely well together again on day two if they are to bring themselves back into podium contention.

Stage two takes place on Thursday 17 July from Zonquasdrif to Bridgetown. More information can be found at www.berg.org.za