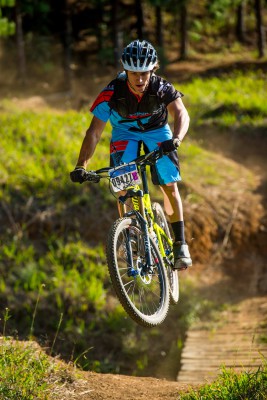 The youngster from Pietermaritzburg has had a great season leading up to the national championships in the Western Cape however he seems to be in a laid back mood with some good recent form in the bank leading into this weekend.

“All the races that I have done this year have been in the build-up to this weekend,” Odendaal said on arrival in Stellenbosch on Thursday. “I would love to have been racing overseas as preparation for National Champs but that hasn’t happened so I have had the best build-up possible.

“I managed to win the Stihl National MTB Series this year which has put me in a good place going into the nationals so I feel really good!”

Racing in the Western Cape wine town of Stellenbosch is not unfamiliar to Odendaal who is excited that they will be racing on a new course come Sunday’s final run and with a few of the South Africa’s top downhill riders expected to be taking part Odendaal understands that the competition will be a tough one.

“I have ridden in Stellenbosch on a number of occasions in the past so it isn’t going to be anything new for me.

“They have laid out a new course which is exciting however I am used to the conditions and the terrain there so I am not too worried about having to adjust from back home.

“I think we are expecting Sam (Bull) and Stefan (Garlicki) to be coming back from overseas for the race which means that they should be the biggest competition for me however I am not putting any pressure on myself and I am just looking forward to racing.

“It is great having some of the top guys back to take part and it just means that the competition is stronger,” an unperturbed Odendaal mentioned.

With a hat trick of national titles to his name going for a fourth could potentially add another dimension in terms of pressure yet Odendaal does not see the race in that light and will approach the event like he would any other race.

“It’s just another bike race for me,” he explained. “We have been doing this for a couple of years and my coach and I are not looking at this race any differently.

“My build-up has been really good and I am going to lean back on that when I am ready to race!”

A Western Cape winter is slightly unpredictable and with some unfavourable weather predicted for the weekend Odendaal understands that he might have some slippery conditions to negotiate however he is not too phased by this.

“I spent five months in Europe last year so I am not too worried about the rain and it is something that I have had to handle before.

“The only thing I am a little worried about is the cold! I hate the cold so that is something that I am going to have to overcome should it be an issue,” he stressed.

Online entries are now closed. Late entries will be accepted at registration with an additional nominal fee of R50. More information can be found at http://www.cyclingsa.com/2015-sa-mtb-champs/

Entries for the event are now open and riders can enter at http://csams.cyclingsa.com/enter-an-event/mtb/2015—mtb—sa-national-championships-xco–dhi.aspx. More information can be found at http://www.cyclingsa.com/2015-sa-mtb-champs/