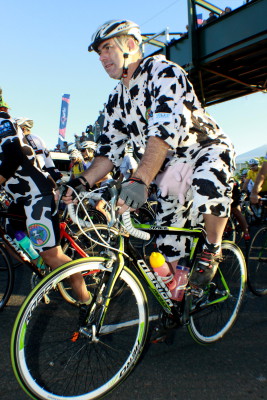 The 45km Fun Ride at the aQuellé Tour Durban presented by Sunday Tribune has become a carnival event where many rider dress in fancy dress or ride to raise funds and awareness for a charity. The distinctive “cows” will be back this year to support the childhood cancer charity CHOC. – Dave Macleod/
Gameplan Media

Durban – The hugely popular aQuellé Tour Durban presented by Sunday Tribune 45km Fun Ride looks set to grow in appeal after the completion of the resurfacing of the M4 freeway that will play host to the outing on Sunday 26 April.

The out-and back route from the Moses Mabhida stadium to the turning circle outside Mdloti has been a hit with part-time riders as it is largely flat and offers stunning sea views along most of its length.

Some casual riders were concerned about pot holes and deteriorating road quality along some sections of the route, but with the completion of the resurfacing of the M4, the entire length of the 45km race will be run on pristine road surface that will make the event even more appealing to novice riders.

Part of the appeal of the 45km Fun Ride is the fact that the route enjoys full road closure allows riders to interact as they pass one another on the return leg, on the opposing direction lane of the M4.

“This is by far the best quality route we have been able to lay on for the 45km Fun Ride,” said route manager Andrew van Rensberg.

“This is such an accessible and attractive route that is well within reach of the ability of any part-time cyclist, and we have always tried to make sure that the race is safe and manageable for every single rider.

“The upgrade to the M4 is simply superb and makes it one of the best sections of road to ride a bike anywhere in the country,” he said, adding that the requisite approval from the city authorities had been painless, thanks to the excellent road quality and the confidence in the organisation and road closure structures.

While the serious road racers take on the demanding 105km route that heads south of the city and up to Pinetown before descending to the M19 and starting the same fast 45km loop that used by the Fun Riders, it is the shorter distance race that is gathering the most momentum. 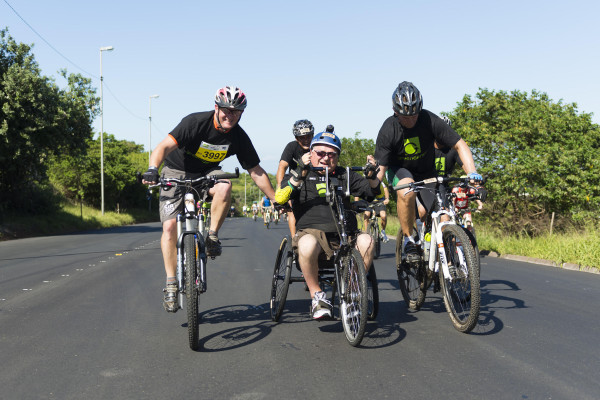 The 45km Fun Ride at the aQuellé Tour Durban presented by Sunday Tribune is an opportunity for thousands of re recreational cyclists to enjoy being part of this iconic Durban event. Ari Seirlis the head of the South African Quadriplegic Association is a regular participant, her being helped up a small hill by riders from the team Green Office. – Anthony Grote/
Gameplan Media

Ethekwini mayor James Nxumalo rode it on one of the bicycles spotlighted at the recent COP17 conference to highlight just how manageable the route is and how well suited to bike transit his city is.

The race attracts social riders on a huge variety of road and MTB bikes, and in recent years it has also developed a carnival-like atmosphere, with more and more riders dressing up in fancy dress attire for the day.

Others choose to make a bold statement by riding for a charity or a cause, generating funds through personal donations or sponsorship per kilometre completed, or simply to raise attention to their cause.

Distinctive last year were the scores of riders dressed in cow-suits that were raising money and awareness for the childhood cancers being addressed by the charity CHOC.

Another distinctive element of the 45km Fun Ride are the hand cyclists, who are allowed to start at the front of the race, and get a huge amount of support along the route from fellow riders and watching spectators.