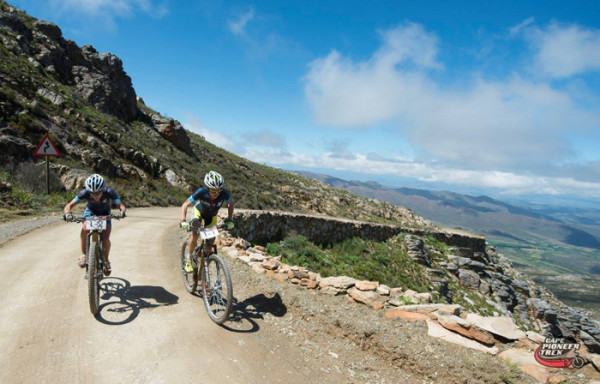 After punctures robbed them of their ability to defend their lead on Wednesday’s Stage 3, Suss and Williamson used their superior climbing strength on Thursday’s 66.3km leg from De Rust to the Swartberg Pass summit to reclaim the race lead from Ascendis Health’s Robyn de Groot (RSA) and Jennie Stenerhag (SWE).

In the men’s race, South Africans Matthys Beukes and Gert Heyns (SCOTT Factory Racing LCB 1) confirmed their status as the strongest team in the race when they won their third stage and extended their overall lead.

Mountain-top finishes are rare in mountain bike racing, but the summit-finish on the Swartberg Pass, a tourism icon, has become a signature stage in the Cape Pioneer Trek over the past few years. At 66.3km, the stage was short, but with 2150m of climbing, it was always going to favour the strong ascenders.

With almost an eight-minute deficit to De Groot and Stenerhag at the start, Suss and Williamson were focussed on pulling as much of that back as they could on Thursday. Their time of 03 hours 15 minutes 59 seconds was just more than 10 minutes quicker than the Ascendis Health pair, giving them the lead again by fairly slim 2:28 margin with two days remaining.

“We had nothing to lose. We felt we could try to make up half our deficit today and the other half tomorrow. But we were quite motivated when we realised on the last climb that we had a decent gap on Robyn and Jennie. So we just gave all we had to the top and it really paid off,” explained Williamson.

“We have a very small lead now so we will just be cautious and go hard on the climbs. Esther is so strong on the climbs, which gives us an advantage, but I’m not sure how much today’s effort took out of us. Hopefully, we’ll be able to defend this lead tomorrow,” added Williamson.

With a lead of almost 19 minutes over the Italian brothers, Emanuele and Roberto Crisi (Celeste Kento Avvenia) at the start, Beukes and Heyns simply had to sit on and let their rivals make the racing. And the siblings were game for the challenge, never far from the front on the early slopes and then setting the pace most of the way up the final climb.

Using their local knowledge, the tall South Africans waited for the start of the steep last kilometre to make their move, surging past their rivals to claim the stage win in a time of 2:50:32. The Crisi siblings crossed the line 25 seconds later with Team Jeep’s Dylan Rebello (RSA) and Thinus Redlinghuys (RSA) rounding out the top three in 2:52:03.

“We rode a tactical race today and it worked out well because we got the win. We pushed the pace in the lead group every time we hit rough terrain to tire our rivals out as much as possible before the big climb and gradually the lead bunch thinned out. I must say the Italian brothers were strong and they climbed well, but we put in our move with about a kilometre to go and it was perfect,” said Beukes.

“I think tomorrow’s stage will be the hardest, partly because everyone is tired and also because of the technical sections later on in the stage, which need a lot of power and focus. Gert and I have a decent lead, but we will take no risks and just try to maintain that lead now,” added Beukes.

In the Veteran men’s race, Rob Sim and Doug Brown won their fourth stage, over 17 minutes ahead of Germans Frank Schmaehling and Felix Prinz (Epic Fighters), who achieved their first podium place of the race. Sim and Brown still have a healthy overall lead over Greg Anderson and Deon Kruger (Bus Boys) with Schmaehling and Prinz now up to third place.

The Master’s race suffered a blow when double stage-winners and the second placed overall team of Izak Visagie and Lieb Loots (Wilde Masters) had to withdraw on Wednesday due to Visagie suffering illness. That opened up the race for the podium somewhat behind Joao Mendes and Waleed Baker (PitstopSport24hrs), the category leaders, who won Wednesday’s stage.

Second place was taken by the Belgian pairing of Jozef De Meyer and Renaat Verbeke (Team L4L5), with South Africans Dirk Labuschagne and Andre Taylor (Rothwell-Risksolve) claiming third. In the overall, race PitstopSport24hrs have a commanding lead over Team L4L5.

The Mixed category race on Wednesday was a four-way tussle, which was decided only on the upper slopes of the Swartberg Pass. Kobus and Fienie Barnard (Klein Karoo Mixed) claimed the win – their fourth – but were just half a minute faster than Katja Cauwenbergh and Ken van den Bulke (Topbike) with the Sasol Mixed pair of Daleen van der Leek and Igna de Villiers grabbing the final podium spot just over two minutes later.

In the overall, Klein Karoo Mixed hold a solid lead over Danny Fowler and Monica Glover (The Bicycle Service Company), who in turn are just 18 seconds up on De Villiers and Van der Leek.

The Solo men’s race continues to be closely contested with Richard Damant winning the stage and clawing back some time on overall leader, Craig Uria, who was 47 seconds down in second at the mountain-top finish. Uria still holds more than an 11-minute advantage over Damant in the General Classification with two days to go.

Lara-ann Everts-Van Deventer maintained her command of the Solo women’s division with another stage win and a lead extension over nearest rival, Carmen Andrews.

Friday’s Stage 5 over 108km from Prince Albert to Calitzdorp will take the riders over the Swartberg Pass again, this time from the opposite direction. Dubbed #SwartbergSequel, the stage will have the added incentive of R50 000 in prize money for the fastest teams or solo riders to cross the summit of the Swartberg Pass.

The distance to the summit from the start of the stage is approximately 20km, with more than half of that up the big climb. The Open Men, Women’s, Veteran and Master categories will have to continue to observe the UCI rule of riders being no more than two minutes apart, but the rule will be relaxed for the Mixed category. And Solo riders will be included in the dash-for-cash contest.