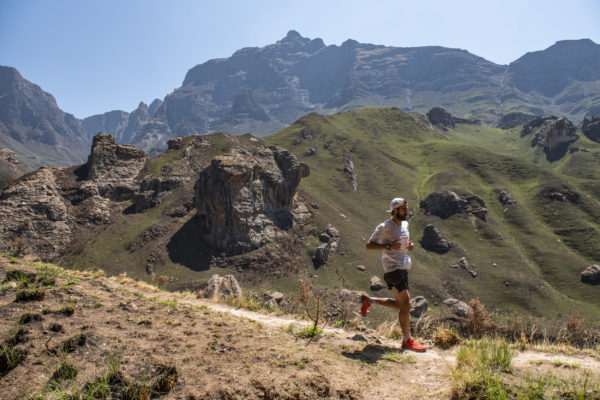 Elite race winner Kane Reilly descends from the Rhino Peak (in the background) at the 2019 Rhino Peak Challenge in the Southern Drakensberg on Saturday. Reilly broke his own FKT record for the 23km outing. Anthony Grote/
Gameplan Media

Reilly came into the event as the current record holder, and with hardly any wind blowing and clear and warm weather predicted for the tough outing, he fancied his chances of lowering the FKT for the 23,5 kilometre round trip from the Ezemvelo office above Drakensberg Gardens hotel to the Rhino Peak summit and back.

The fact that he had a fired up Johardt van Heerden, fuelling the fiercely competitive rivalry between these two trail-running pacesetters this season, helped contribute to Reilly’s record breaking run.

Reilly reached the summit of Rhino Peak two minutes clear of van Heerden and enthused about the brutal ascent that had slowed down all the other fundraising athletes who left two hours earlier in the morning.

Reilly flew down the  return leg to reach the finish in two hours and seventeen minutes, shaving three minutes off his own record.

The first non-elite athlete home was just as impressive as Thabo Madlala, a 37 year old Underberg local, who is part of the Endangered Wildlife Trust Crane Conservation project operating in the area and one of the beneficiaries of the event, was all class as he cantered into the finish in three hours and twenty seven minutes.

The event is a fundraiser involving elite athletes, people of influence and so-called ‘everyday heroes’, each striving to raise money through personal pledges and offering an assortment of prizes to those that contribute.

Underberg local Andrew van Rensberg will not forget the event in a hurry as he raced with iconic ultra-distance trail runner Ryan Sandes after winning the Salomon team competition.

In the previous years the event has raised just over R1 million, and this year’s record of R834 596, exceeded the previous annual fundraising record by a massive margin.

The event raises money for rhino conservation as well for the conservation of the endangered species that live in the Southern Drakensberg like the Bearded Vulture and the various crane species.