Riders, from the pros to weekend warriors, were blown away by the total race experience at the inaugural Varsity MTB Challenge recently held in Franschhoek in the Western Cape 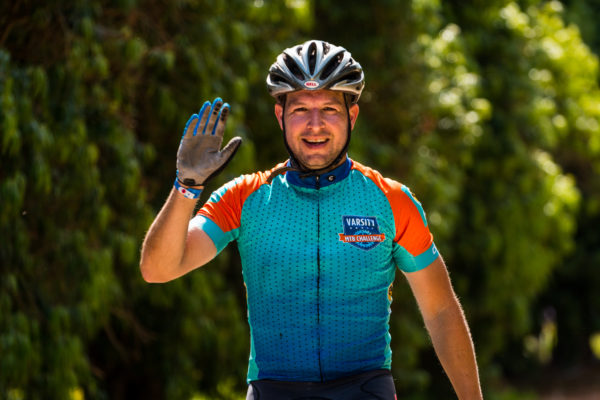 Going into the first Varsity MTB Challenge ever staged, not many riders really knew what to expect. But after two days of riding spectacular Cape Winelands trails, the finish-line buzz confirmed what a phenomenal event everyone had just been a part of.

One of the major and unique appeals of Varsity MTB Challenge is that the race is open to not only official university teams, but also to any other students, alumni or unaffiliated riders (i.e. the general public), regardless of how competitive they might be.

However, what seems to have made a real impact on those lucky enough to have been part of the maiden Varsity MTB Challenge was the sheer quality of the experience.

“I was blown away by how well organised the event was,” said James Tennant, a pro rider for Team Lights by Linea. “Coming from a road racing background, I was really impressed: getting a face cloth when you finished, the shower facilities and the lunch afterwards. And the marshals…I saw more marshals than I do in a road race.”

The only downside for Tennant was being dropped on the singletrack by his girlfriend (and Specialized ambassador) Lara Woolley. “She had to wait for me at the bottom!” he said. “But the distances were just right: not too short, not too long. You finished feeling tired, but able to soak up the positive experience. I hope to be back next year to see what else they have up their sleeves.”

Action photographer Craig Kolesky, who has ridden four Cape Epics, also appreciated the thought that had gone into planning the route. “It was great to ride a race that was over two days, with a later start time, and although the stages weren’t that short (averaging just over 50km with 1200m of climbing), you came in early and had the whole afternoon to hang around, spend time with your family or braai,” he said.

“The trails were amazing – some parts were from this year’s Epic route and brought back those hectic memories of suffering, but we weren’t suffering this time, just having fun. The waterpoints were where they were supposed to be, and were stocked cleverly. I think the best thing for me were the French fries and tomato sauce at the second waterpoint. That was a big win!”

Someone like Ash Haigh-Smith was a good barometer of many of the riders out there. As a rally driver for AHSRacing Ford, his day job has nothing to do with mountain biking, but with seven punctures on Stage One, he had more reason than most to be thankful for the official ‘race guides’, those mechanically savvy riders who brought up the rear, lending a helping hand or spare parts to anyone encountering equipment problems.

“The race started off with a great big climb,” said Haigh-Smith, “but the views were phenomenal. The route catered for every type of rider and tested them to the limit. Your technical skills were really tested on Stage Two with the trails in Boschendal being fantastic. The waterpoints were awesome – I noticed the little things like the music, the chips, and the super-helpful volunteers. And the guides were very accommodating, with a lot of spares. My Stage One was disastrous, so I got to know the guides really well!”

Planning for Varsity MTB Challenge 2017 has already begun – riders should expect the race to once again take place in spring, with dates set to be released in time for participants to take full advantage of the early bird discount.