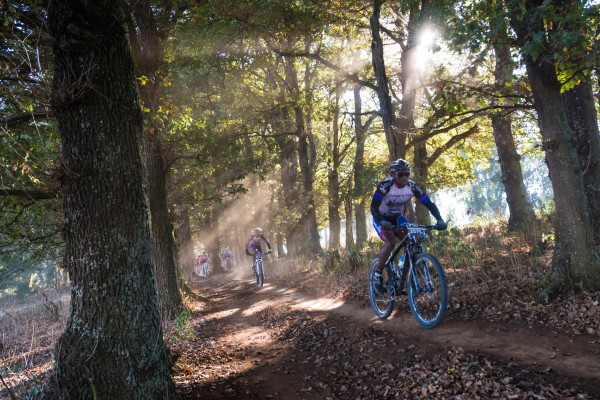 Ndumiso Dontso (front) and Sipho Kupiso (back) flew the flag high for Martin Dreyer’s RMB Change a Life MTB Academy in 2015 and they, together with their three other CAL teams, aim to do the same again come the Race event of this year’s KAP sani2c from Underberg to Scottburgh between 12-14 May. Anthony Grote/ Gameplan Media

Himeville – The 2016 KAP sani2c’s Race event, which takes place from Glencairn Farm near Himeville down to Scottburgh on KwaZulu-Natal’s South Coast from 12-14 May, will see no fewer than four of Martin Dreyer’s RMB Change a Life MTB Academy two-rider teams in action as they look to race to success while learning along the way as well.

Having proven their remarkable endurance and ability to take on some of the country’s finest marathon and stage racers in recent years, Sthembiso Masango and Mazwi Smimango, Sipho Kupiso and Ndumiso Dontso, Bongumusa Zikhali and Scelo Mhlongo as well as Siyanda Masango and Dumisani Shabalala will look to rub shoulders with this year’s talented sani2c men’s field.

“sani2c is just such an awesome event to be part of,” explained Dreyer. “The route takes riders on a wonderful journey from the mountains to the sea.”

“Day Two must be one of the most spectacular stages of all mountain bike events in South Africa and it great for my guys to get out of the Valley of a Thousand Hills and tackle trails from a different part of the province.

“More than the route and the racing though, sani2c is about the experience – especially for my RMB Change a Life Zulus,” he added holistically.

While striving to fly the RMB Change a Life flag high during their three days of racing, Dreyer wants his charges to leave the event with far more than just the racing lessons they learn while in the saddle.

“Being able to give our guys the opportunity to ride alongside CEOs of huge companies and major characters of South Africa; overnighting with these people opens our guys’ eyes and gives them such incredible confidence to work towards their goals.

“Once you’re is out there, on your bike and enjoying the trails, everyone is equal and our Change a Life Zulus just gain so much from that experience,” explained Dreyer.

Missing from this year’s RMB Change a Life contingent though are John Ntuli – who recently joined Merchants, a Dimension Data company – and Mboneni, who his currently studying Agricultural Management and Environmental Science through UNISA.

“John (Ntuli) has been given a wonderful opportunity this year and while he is obviously very much a part of our RMB Change a Life MTB family still, we’re very excited about the potential his new situation with Merchants brings.

“Mboneni (Ngcobo)’s exams do mean he cannot ride sani2c this year with his usual partner, Sthembiso Masango, however it is just great to see him utilising the full support that our Change a Life programme offers and we are thrilled to see him pursuing his studies so diligently.

“John and Mboneni’s absence also open up an opportunity for some of our youngsters who otherwise probably would have missed out, and we’re really looking forward to giving these guys such an incredible opportunity.”