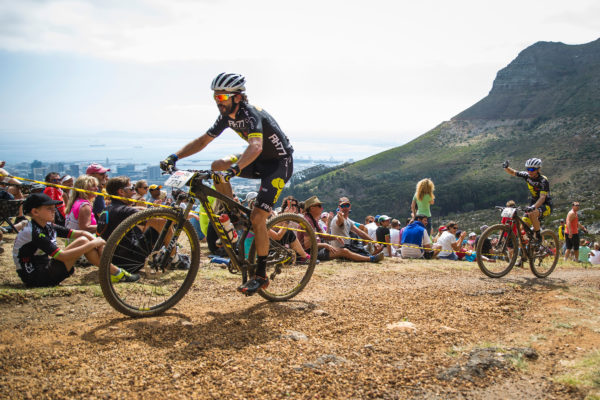 Cape Town, 25 February 2019 – Robert Hunter, the first South African to win a stage at the Tour de France, has finally taken up the challenge and is riding the Absa Cape Epic this year. “I’m happy to be back on the bike and enjoying cycling as it’s an amazing sport, and I have to say thanks to the Absa Cape Epic organisers for knocking on my door every year to come and do the event,” he says.

Hunter is one of the country’s best-known road cyclists. The first South African to compete in the Tour de France in 2001, he won stage 11 in the 2007 iteration of the famously gruelling continental race. It was just one of 16 grand tours he completed in the 15 years of his professional career, before he retired in 2013. Conceding that he’s not as fit now as he was then, Hunter notes that “the change from being a professional to normal life went possibly way too easily for me and I never really looked at my bike much. I kind of enjoyed the lazy mornings and no diets!”

For the Absa Cape Epic, Hunter will be pairing up with fellow former professional road racer René Haselbacher, who has three Epics under his belt, including a stage win in 2015. Team PTG/RH77 (a combination of Hunter’s sports-management agency ProTouchGlobal and Haselbacher’s cycling apparel company RH77) will be joining 649 teams on the eight-day, 624-kilometre race, which includes 16 650 metres of climbing. Starting in Cape Town – with the integral prologue stage on Table Mountain, providing indications of who has prepared best for this colossal undertaking – the route will take riders to Hermanus, Elgin and Stellenbosch, with the grand finale at Val de Vie Estate, where fans can enjoy a fun-filled day marking the achievements of all the finishers of this gruelling event.

One thing Hunter has done every year since 2012 is the Change a Life Cycle Tour. “For one week a year I ride this event with 70 other people, it seems to have gotten harder or I am getting fatter and lazier, so making the decision to ride the Absa Cape Epic this year has been a great motivator to get back on that bike,” says Hunter.

The Absa Cape Epic has appeal across an array of cycling disciplines, and has served to bring together athletes who previously wouldn’t have ridden together. “In the past road cyclists never went near a mountain bike or a cyclocross bike but today many people use them on a regular basis to keep boredom at bay by mixing it up a bit,” Hunters notes. An example is Spanish motorcycle road racer Aleix Espargaró, who will be tackling the Absa Cape Epic between MotoGP events.