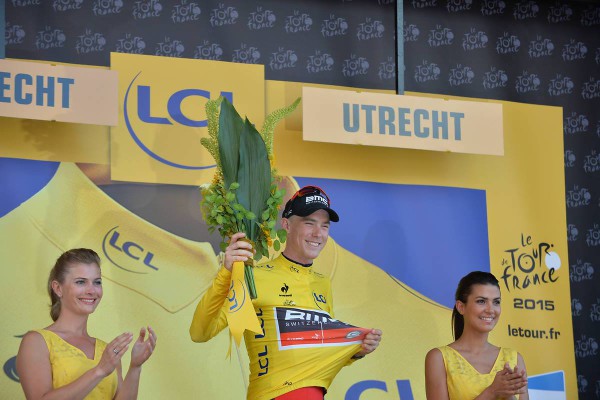 The first yellow jersey of the 102nd Tour de France is Australian. Rohan Dennis of BMC Racing Team was the only rider to complete the 13.8km course in less than fifteen minutes. He outclassed the three favorites Tony Martin, Fabian Cancellara and Tom Dumoulin and rode the fastest individual time trial ever at the Tour de France.

198 riders took the start of the 2015 Tour de France, the first of them being Eritrean time trial national champion Daniel Teklehaimanot (MTN-Qhubeka), the first black African cyclist to take part in the race. The 2010 Dutch champion for individual time trial Jos van Emden (LottoNL-Jumbo) who was the ninth rider in action pleased the local crowd as he set the first time of reference: 15.11. It was a strong indication that it would be a very fast race. Clocked with one second deficit from the Dutchman at the half way time check, former world hour record holder Rohan Dennis from BMC bettered his time by fifteen seconds and set the fastest ever average speed of an individual time trial at the Tour de France with 55.446. The previous record was held by Chris Boardman with 55.152km/h in Lille in 1994 on a 7.2km course.

Mollema and Pinot, the best of the climbers

Nairo Quintana (Movistar) was the first of the top GC contenders to cover the 13.8km of the flat course. He was satisfied with his ride but another climber, Thibaut Pinot (FDJ) bettered it by twenty seconds. Bauke Mollema (Trek) rode four seconds faster than the Frenchman. Among the big four, the fastest was eventual the last man on the road: defending champion Vincenzo Nibali (Astana) who walked away from stage 1 with an advantage of 7 seconds over Chris Froome, 15 seconds over Alberto Contador, and 1.01 over Quintana. All of them remained behind Pinot whose French rival Romain Bardet lost 54 seconds on him.

Dennis presumed he’d remain for a long time on the hot seat. It was the case as Tom Dumoulin (Giant-Alpecin) was only one second down on him at the half way check point but crossed the line with a deficit of eight seconds. Tony Martin (Etixx-Quick Step) also failed to approach his time of 14.56. Dennis was the only rider under fifteen minutes. Fabian Cancellara (Trek) saw his hope to win the inaugural time trial of the Tour de France for the sixth time vanishing as he was timed six seconds slower than the specialist from Adelaide. Dennis, who won the Santos Tour Down Under in January, is the first Australian to take the yellow jersey since Simon Gerrans two years ago. He was awarded in Utrecht by the King of Holland.