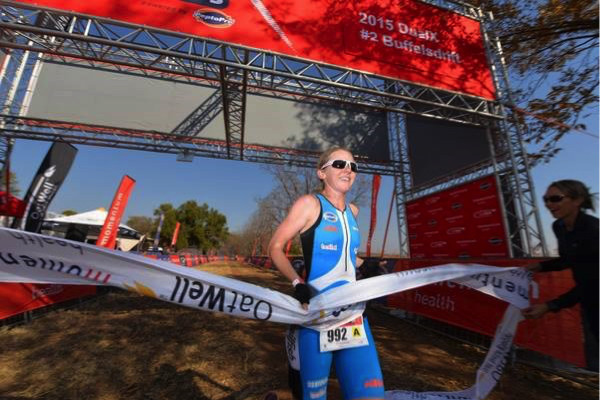 There are four events in the 2015 Momentum Health Oatwell DualX Series, powered by Pepto Pro, South Africa’s most prestigious off-road duathlon series. The three best results for each participant will count towards his or her overall standings; and Round 2, which took place at Buffelsdrift, Pretoria this past weekend, could prove decisive.

In the men’s division, Brand du Plessis currently leads after winning Round 2 and finishing second to multiple X-Terra world champion, Conrad Stoltz, at Round 1 in February. Lying second and third in the popular series currently, are Bryn Freeman and Alan Gordon respectively. Stoltz started Round 2, but withdrew just minutes after the start with a calf muscle injury. He will have no room for error in the remaining two events if he intends contesting the overall series title.

Du Plessis led virtually from start to finish at Round 2, assuming the race-from-the-front role he’s become so accustomed to in previous years. But it was never a comfortable lead and he had to work hard to stay ahead of eventual runner-up, Theo Blignaut, who is now racing off-road triathlon and duathlon on a full-time basis. Third place went to Nico Sterk with Alan Gordon and Michael Ferreira rounding out the top five.

“I felt surprisingly good. On the run I tried to not overdo it. I felt a bit flat at first during the bike leg, especially on the early climbs. But then I began to find my cycling legs and ended up riding quite well,” said Du Plessis.

“The trails here at Buffelsdrift are really nice. I rode with a dual suspension bike for the first time in a duathlon and it definitely makes a difference on the rough terrain. It’s much kinder on the body and better in the long run,” added Du Plessis.

The women’s race at Buffelsdrift was a much closer affair than the men’s with the first four all crossing the finish line within the space of less than two minutes. Andrea Steyn claimed the victory, giving her two wins in two series outings. Nicollette Griffioen was second, with Carla van Huysteen rounding out the podium.

“For the first time in a really long time I felt my old self again. It was such a nice cycle route and I really enjoyed all the singletrack. I was expecting the others to catch me at some point, but they never did. That made what felt like a good race into a great race,” smiled Steyn.

As far as the Series goes, Steyn’s two wins put her in top spot with Nicollette Griffioen and Adrienne Moolman, fifth at Buffelsdrift, holding second and third positions respectively.

After a chilly start, the day became a typically mild Highveld winter’s day. Over 1300 participants enjoyed the Buffelsdrift venue, which incorporated different distances, catering for all fitness levels. The full distance is a 5km trail run, 30km mountain bike and 2.5km trail run, attracting the serious racers; with half and quarter distance events on offer for those more focussed on pleasure than podium pursuits. There are also relay team options for those more focussed on either trail running of mountain biking only.

The Momentum Health Oatwell Series, powered by Pepto Pro, now moves to Van Gaalen near Hartebeespoort Dam on 17 October for Round 3. For more information, visit www.dualx.co.za.