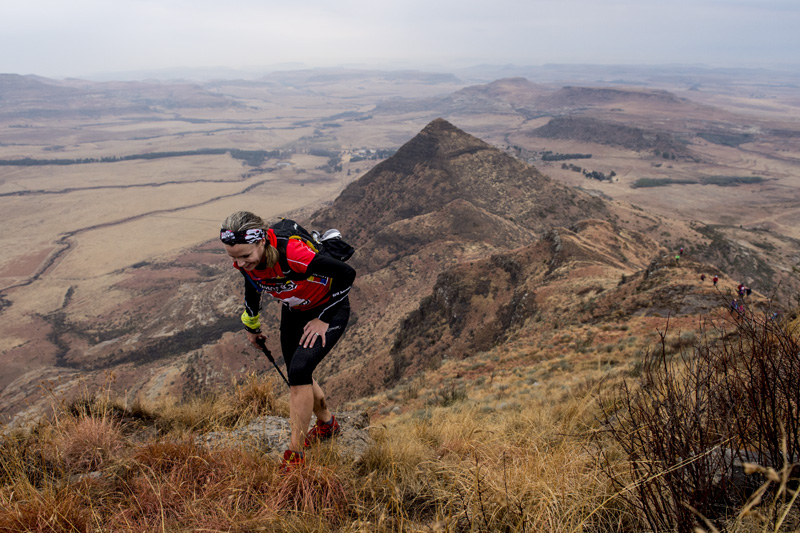 A staggered start (to prevent bottlenecks on the tight mountain trails) of four seeded batches, saw the A bunch depart before sunrise at 06:15am. This batch contained some heavy hitters including the likes of Ryno Griesel and Jock Green.

Eight runners from this group reached checkpoint one on top of the ‘first pyramid’– a five-kilometre climb with 700 metres of ascent that tops out at 2167m (above msl) –in just under 30 minutes, a relatively slow time because of an intense tactical battle on the climb.

“It was a game of cat-and-mouse that first hour,”commented Griesel, who’s well experienced in navigating the unmarked route. “The locals didn’t want to go ahead because they knew they would be followed and I also didn’t want to run in front, for the same reason. At one stage we were all walking…”He said, adding how a very special part of this race is the strategic tussle.

Defending champion Sampie Makoakoe, a farm labourer at Moolmanshoek and compatriot Chabedi Nyedimane made their move on the descent from the first pyramid and down the back of Jacobsberg. The weather had taken a turn for the worse by the time Makoakoe and Nyedimane reached checkpoint two with driving ice rain and strong winds dropping the temperature to well below zero and making navigation exceptionally tough due to the low visibility.

The severe conditions however, suited the local runners who regularly train on the route. Nyedimane and Makoakoe ran together all the way to the base of Sekonyela’s Hat (the final ‘peak’of the 4Peaks), chased by a group of around six runners, some three minutes back. Makoakoe charged up the steep Sekonyela’s climb, running in places where Nyedimane had to scramble and walk.

He built up a ten-minute lead this way and would hold on to it all the way to finish, completing his successful title defence in a time of 02:45:31. His time is was some three minutes shy of the record set by Ryan Sandes.

The women’s race was absolutely dominated by Jeannie Dreyer. Dreyer nearly missed the start and had to make up a deficit on the A-batch, but still managed to come home in a time of 03:36:54, nearly an hour ahead of second-placed Natasja Kask, and good enough for a top 20 overall placing. 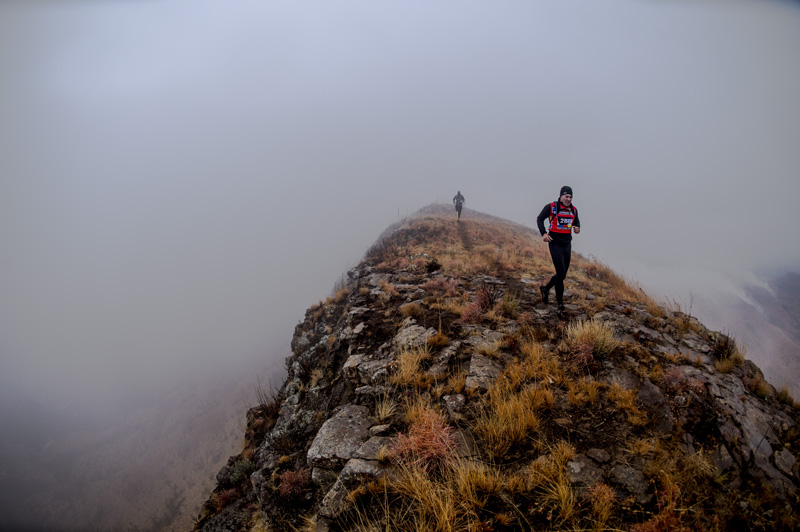 Living up its name

The true ‘mountain challenge’was going on behind the front runners though, with nearly 50 percent of the 280 starters being first timers. One of Pure Adventures’goals is to welcome newcomers to the world of mountain running and this philosophy translates into the event.

“I think the generous cut-off of nine hours is a big attraction,”commented race logistical manager, Michael de Haast from Pure Adventures. “Along with the general vibe of the weekend and of course the spectacular route,”De Haast said.

The route is a 24-kilometre hill-and-dale affair taking in the four iconic mountain peaks along the mountain bowl that cradles Moolmanshoek Nature Reserve. The route is unmarked and race unsupported and compulsory gear includes a space blanket, whistle, waterproof jacket and at least two-litres of water.

“These were by far the worst weather conditions, we ever experienced for the race however,”De Haast added. Despite the conditions there was a very low attrition rate with 268 of the 280 starters successfully crossing the finish line. For many a life-changing experience.

“It was a true mountain experience,”Griesel said, summing up what everyone –from the racing snakes to those in the sweeper bunch – experienced out there. “Just great for everybody, you got to experience in a safe environment how quickly the mountain changes.”

“It was super beautiful up there,”he said. “With the mist and the rain… but it was bitterly cold with the wind chill. The importance of compulsory gear, even if it’s a local mountain and the weather looks good, can never be underestimated.”

‘Underestimated’was the theme of many a war story during Saturday’s night’s post race festivities, which included the traditional spit-braaied lamb. But perhaps not nearly as much as ‘camaraderie’and ‘prevailing’. 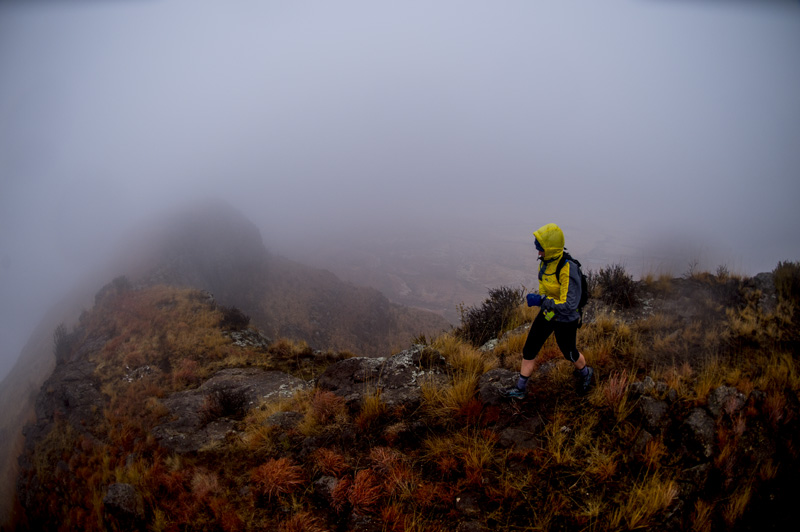 Many were right back into their (by now dry) running gear for Sunday morning, which saw the running of the Runtastic Pyramid Challenge, a time-trial style event to the peak of the first pyramid and back down. Athletes started in reverse order, seeded from their finishing time from the 4 Peaks, the previous day.

Chabedi Nyedimane took the win in a time of 21-minutes for the up-and-down route, using his knowledge and technical skills to overcome the blustery conditions on the way up and then descend at pace. The performance earned him the top Challenge Medal (a special medal all runners who completed both races received) and big chunk of the R10 000 total purse on offer for the secondary event.