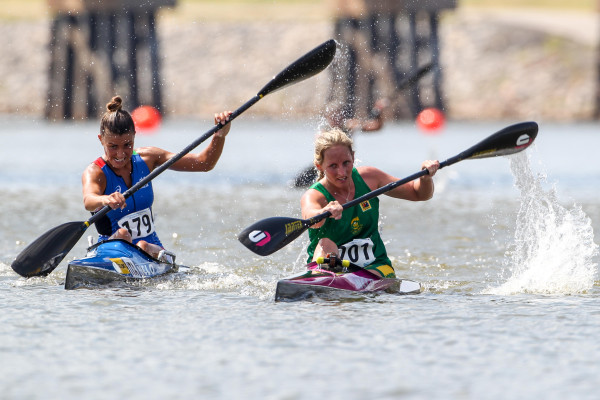 After producing one of the surprise performances of the 2014 ICF Canoe Marathon World Championships Jenna Ward will be looking to go better than her bronze medal as she aims for gold in the Under-23 Women’s K1 race this weekend in Győr, Hungary.
Balint Veckassy/
Gameplan Media

Durban – The biggest team of South African marathon canoeists to contest the ICF World Marathon Championships has settled into the Hungarian town of Győr on the waters of the Danube River ready for the global title deciders from 9-13 September with six-time World Champion Hank McGregor and former Under-23 World Champion Andy Birkett leading the charge.

The two have developed a fascinating rivalry with the older McGregor heading into the twilight of his career while the 24 year old Birkett starts to establish himself as a man to catch however with a world championship medal at stake the racing will be of the highest quality as they compete for the international crown.

Although the Jeep Team/Kayak Centre star McGregor has raced at a number of World Championships and won six of them he still feels the nervous energy in the build-up however with the experience that he has he is always going to be the man that the rest of the field will be marking closely.

“Pressure definitely comes with the territory when you are holding both the K1 and K2 world titles,” McGregor said before heading off to Győr. “When we arrive there are a lot of nervous bugs and a lot of excitement and I have learnt that you have to just deal with whatever comes your way.

“There are not going to be a lot of surprises like a lot of people expect because I know the opposition and the course but if you haven’t bought your A game then you are going to battle.”

Having raced in Hungary before McGregor realises that you have to be prepared for anything as the conditions this year could be hugely different to his last outing in the Hungarian town.

“The last time we raced there, it was 2007 I think, the river flooded and rose about nine metres overnight and there was no land to portage on with the town almost being evacuated so you have to be ready for anything.

“If it stays the way it is at the moment it is going to be a super tough course with a little bit of flow which is different to a lot of other dead flat marathon courses.

“There is definitely going to be an upstream leg and a downstream leg which obviously changes your tactics a bit so there is a lot to work with,” he mentioned.

Former Under 23 Gold medallist Andy Birkett has been jetting around the world recently with a trip to Europe a few weeks ago to begin his preparation with a Marathon World Cup silver medal in Germany as well as the Sella Decent in Spain leaving the Euro Steel hero happy with his preparations.

“The last three weeks have been really hard after I got back from the Sella and I have been happy with the hours that I have been putting in the boat and everything has been feeling good,” Birkett mentioned.

The laid back Pietermaritzburg resident will be competing in his first senior marathon world championship so he understands the enormity of the task however with the added pressure of a senior championship he is trying to stay as calm as he can.

“I do tend to put a lot of pressure on myself so I will be trying to tone that down and just have as much fun as possible.

“Racing alongside a guy like Hank (McGregor) is great but I think that our South African team going over is going to be strong and I look forward to some good results from our team,” he added.

Birkett and McGregor will be joined by 2014 World Marathon Championship medallist Jenna Ward at this year’s event and with an Under 23 medal K1 medal under her belt she is hoping that she can use that valuable experience to push for higher honours this year.

“I know what I have to do to get a medal and so I am just going to go there and try and do something very similar again this year.

“I have been focusing on my marathon paddling from the beginning of the year and I knew that I had to improve my speed and that was the main goal going into worlds and I think we have done that so I am feeling very confident going into it,” a motivated Ward enthused.

The competition gets underway with the ICF Canoe Marathon Masters & Paracanoe World Cup from 9-10 September and another strong South African contingent will be taking part in this event with a number of medals expected to return home.