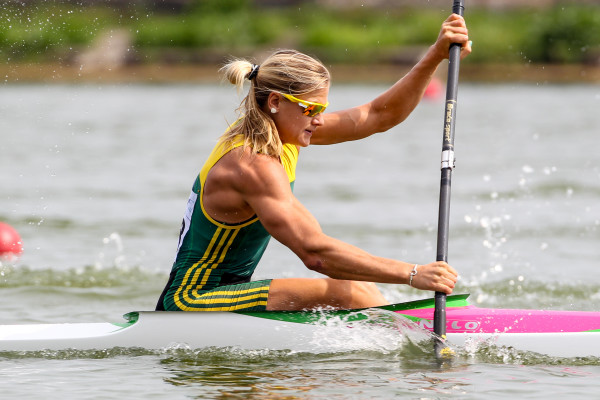 The 2015 ICF Canoe Sprint World Championships could prove to be make or break for South African paddling sweetheart Bridgitte Hartley who is eyeing a qualifying place at the Rio Olympics in 2016 when she competes this weekend in the showpiece sprint event where she won a bronze medal in 2014.

Milan – The South African team has arrived in Milan, Italy for the upcoming ICF Canoe Sprint World Championships with the added pressure of an Olympic Games next year meaning that this is a make or break event for those wishing to qualify for the Rio showpiece in 2016 and a large group of paddlers from South Africa will be looking to impress on the world stage from 19-23 August.

Sprint coach and manager Craig Mustard has been impressed by the build-up that a lot of the paddlers have enjoyed and is excited by the teams prospects going into the world championships.

“Judging by the team spirits and the quality of today training season it’s worked perfectly and we now have the strongest and healthiest team entering into the world championships and Olympic qualifier that we have had in years,” Mustard said.

“The able body team is really exciting. We have Bridgitte Hartley who has just completed her final European based training camp and has met the team stronger and faster than her 2012 bronze medal performance.

“Chrisjan Coetzee has also been focusing solely on the 200m k1 event and has also been training for the past 6 weeks in Hungary to ensure that he is at his best for the weekend’s championships.”

The team is a mix of youth and experience with two paddlers having taken part in the Junior and Under 23 World Championships last month where they produced great results which is encouraging for Mustard.

“Louis Hattingh is also coming off a really good result where he finished eighth in the U23 final at the World championships.

“Although he is now competing in the senior field at the age of only 19 he still will be aiming at setting a personal best time and finishing as high as possible in the senior ranks.

“The K2 crew of Esti van Tonder and Tiffany Kruger will also be exciting to watch, Esti recently showed her individual improvements when she raced to a seventh place finish in the U23 World championships in Portugal,” an excited Mustard added.

Warm conditions are expected over the four days of racing in the Italian city of Milan and the twelve-paddler strong team from South Africa will get their World Championships underway with three para-canoeing races on Wednesday as Jono Wing, Graham Paull and Stuart Hogg are the only paddlers racing on the opening day.

Thursday’s action sees six South Africans in action with 2012 Olympic bronze medallist Bridgitte Hartley hoping to produce a favourable result in her heat for the 500m women’s K1 race. The C-boat paddlers Hosea Seleka and Phillemon Mahame will be the next two paddlers in action in their 500m C2 heat whilst both will return later in the day for the C1 1000m and C1 200m heats respectively.

Having produced one of the best results by a South African at the Junior and U23 Sprint World Championships just a month prior Louis Hattingh makes the step up to senior paddling as he takes on the world’s best in the 1000m K1 on Thursday.

Hattingh will race again on Thursday as he has joined up with Gabriel van Wyk for the men’s 200m K2 heat as Lambert Flick had to withdraw due to injury which opened the door for Hattingh to race in a K2 event.

The final South Africans that will be racing on Thursday are Tiffany Kruger and the young Esti van Tonder in the women’s K2 500m heat. Van Tonder was another paddler that excelled at the recent Junior and U23 World Sprint Championships and will take huge confidence from her seventh place finish at the Junior World Champs.

Friday’s final day of heats will see a similar line-up to Thursday’s action with Hartley taking part in the women’s 200m K1 heat. Western Cape’s Chrisjan Coetzee races in his first race in the men’s 200m heat whilst Van Tonder and Kruger return for the women’s 200m K2 heat later in the morning.

Seleka and Mahame have got a busy day of racing with the pair taking part in the C2 200m heat and C2 1000m heat within 45 minutes of each other whilst Seleka has the C1 500m heat to deal with in the final heat involving a South African.

The weekends action will be decided once the heats have been run with a number of the South African contingent hoping to make it through to the weekends racing.

The 2015 ICF Canoe Sprint World Championships will be live streamed so follow the link here to see the live coverage of the event: http://www.milanworldcanoesprint.com/en/results-live-streaming