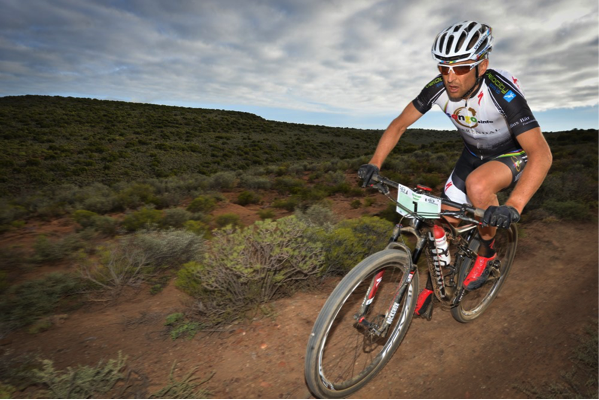 Two-time winner, Christoph Sauser, pictured here on his way to second place in 2014, will be using Saturday’s Fairview Attakwas Extreme MTB Challenge as his first major preparation race in his quest for a sixth Cape Epic title.
Photo credit: www.zcmc.co.za

After a short hiatus, two of global mountain biking’s most successful competitors will revive their rivalry at the Fairview Attakwas Extreme MTB Challenge in South Africa on Saturday. Germany’s Karl Platt (Team Bulls) and Switzerland’s Christoph Sauser (Investec-Songo-Specialized) top the high-profile start list for South Africa’s premier one-day race, which covers a distance of 121km with an accumulated elevation of just under 3000 metres.

The Attakwas, which takes the competitors from the dry, rugged Karoo to the wind-swept coast in the middle of the harsh South African summer, is widely considered to be the equivalent of a tough Cape Epic stage, which is appropriate since Platt and Sauser share the record of five Cape Epic wins apiece. They’re both gunning for a sixth Epic title this March, Sauser coming out of semi-retirement to try reclaim the record he held for a year….

For most Cape Epic podium contenders, Attakwas, which usually takes place eight weeks before, is a perfect form-checker. Platt won his only Attakwas title last year, while Sauser won the race in 2013 and 2015.

As the defending Attakwas champion, there’s intense scrutiny and pressure on Platt. But the 38-year-old German is playing his cards close to his chest.

“I’m feeling okay, but I will have to see how I feel on Saturday in a proper race situation. It’s hard to predict how it will go because the field is really big and strong this year. It’s getting super interesting. I am excited about where everybody is at the moment. It’s a good time for mountain bike racing,” said Platt, cautiously remaining positive but non-commital.

For Sauser, the Attakwas return signals the seriousness of his comeback. It’s not a race you do for fun. The 40-year-old Swiss ace has been training for the past month in the cold and snow of his home country, but he’s unfazed about the significant swing in conditions he’ll face on Saturday.

“I grew up training in the cold and snow. I have no problem training outdoors in the winter. It will be a big change from minus 5 degrees to over 30 degrees, but I sure want to be in the hunt for the win Attakwas win,” said Sauser.

“For me the race has three stages – the Karoo, the Attakwas Reserve and then the gravel roads, heat and headwind at the end. I believe experience helps a lot, especially through the Attakwas Reserve. Knowing the course from previous years makes it feel shorter,” he smiled.

Another former Cape Epic winner, Kristian Hynek (Topeak Ergon) will be on the start line to tackle his first Attakwas. The Czech rider has been training in South Africa for a few weeks and will be looking to his South African teammate, Erik Kleinhans, a former Attakwas podium finisher, for guidance in a race that punishes misjudgement of any kind.

“Attakwas falls at a strange time, so early in the year. But it’s cool to be able to take a break from all the training and do a race. Obviously both Kristian and I would like to do well with a high finish, but it’s much more a test race for us than a full out priority goal race,” said Kleinhans.

Gert Heyns – fifth last year and third in 2015 – is eager to give his new team, Ascendis Health, their first male podium finish in a high profile race. A South African hasn’t won Attakwas since Matthys Beukes in 2012. Heyns has proved to be the most likely rider to be the next one.

“I’m really excited. I enjoy kicking off the year with Attakwas. And it’s good to see so many top names on what I consider my home turf,” said Heyns. “This must surely be the best field ever for this race and I’m definitely going for a podium finish.”

In 2015 Heyns, racing with no real pressure, ventured on an early breakaway at Attakwas. It was an against-the-grain tactic that saw him claim the King of the Mountain prize and finish third. But Heyns says he’s likely to take a more cautious approach this year.

“I’ll have to race on instinct this year and see how my options unfold. With so many strong riders here I’ll have to be smart and not take any major risks,” said Heyns.

In addition to Heyns and Kleinhans, other notable South Africans on the entry list include the Telkom BCX pair of Waylon Woolcock and HB Kruger and Dylan Rebello.

Swiss racer, Urs Huber (Bulls), holds the course record of 4:47:56, which he set when winning the 2015 edition. With such a strong field, a new record isn’t out of the question. However, the weather conditions will be the real decider. A forecast maximum temperature of 25 degrees Celsius with a 14kph southeasterly (head)wind at 11h00 at the finish isn’t particularly adverse, which means a record time may be possible.

The event has been given International Cycling Union status for the first time this year. This ensures increased international media coverage, boosted prize money and UCI rankings points for top finishers.
The race starts at Chandelier Game and Ostrich Show Farm near Oudtshoorn in the Karoo and finishes at Pine Creek Resort at the coast, near Groot Brakrivier. Follow the racing action via live-tweets on the @attakwas twitter account on Saturday from 06h30.