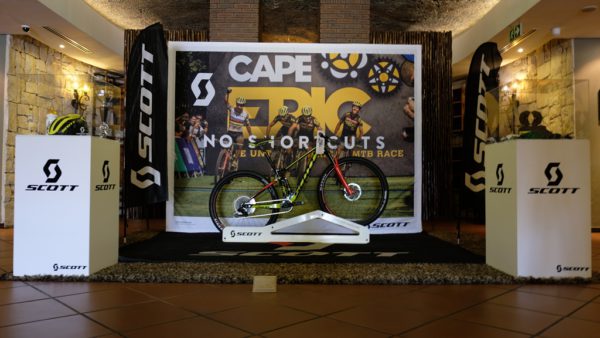 The No Shortcuts motto signifies SCOTT Sport’s approach to everything they do, from product development, through racing and into after sales support. Photo by Iwan Kemp.

From Friday the 1st of September to Sunday the 3rd, SCOTT Sports Africa hosted the local cycling media, and their SCOTT Bicycles dealers, at the Protea Hotel in Durbanville; to introduce them to the 2018 range of cycling products form SCOTT Sports. Though education was SCOTT’s primary aim, the lure of experiencing the SCOTT lifestyle and riding the new bikes were the draw cards for the various guests.

The weekend got underway with the media launch on Friday before the dealers spent the weekend learning about and riding the SCOTT products on Saturday and Sunday, as they explored the extensive Tygerberg Trails network. The famously hilly trails provided the perfect testing ground for SCOTT’s 2018 Spark RC, Spark, Genius and E-Spark bikes.

Now in its second model year the Spark RC has undergone a number of refinements for 2018, including a stronger carbon layup, which allows SCOTT to produce their lightest full suspension frame yet, cleaner internal cable routing and the scraping of front derailleur mounts on all carbon models. The 120mm Spark, the RC’s longer travel sibling, is similarly updated for 2018 and is set to remain SCOTT’s biggest seller in the South African market; with its blend of trail ridding poise and lightweight builds making it the perfect do-it-all mountain bike.

Other exciting bikes which SCOTT Sports Africa introduced at the launch were some of their gravel, road disc, e-bike and triathlon platforms. Plus the commitment that any product available internationally online at www.scott-sports.com, can be pre-ordered from any SCOTT retailer; with the products landing in South Africa every two weeks. Internationally SCOTT is placing more emphasis on triathlon, a shift in focus signalled by more research and development work and the signing of the Brownlee brothers. Alistair and Jonathan Brownlee have been the dominant athletes in Olympic distance triathlons in recent years and SCOTT Sports is proud to have joined them for the next Olympic cycle. While Jonathan will retain his short course focus, in pursuit of gold at Tokyo 2020, Alistair aboard a Plasma time trial bike will be shifting his focus to IRONMAN 70.3, with the aim of winning the 70.3 World Championships right here in South Africa next year.

While the Plasma is all about slicing through the wind with the maximum efficiency the gravel bikes are designed to set free the imagination of every cyclist. Epic all day rides and longer adventures await on the plethora of gravel roads which criss-cross South Africa.

Despite the popularity of gravel grinding the most eagerly awaited product was the new Genius. Following on the redesigned Spark for 2017 the 2018 Genius now also makes use of a trunnion shock mount, with the inverted rear shock mounting to the front triangle of the bike – low down near the bottom bracket. The redesigned Genius features a horst link suspension layup, which combined with SCOTT’s Twinloc technology produces a supremely capable bike. At the flick of the Twinloc switch the Genius goes from a 150mm travel gnarly trail bike to an efficient pedlar, by firming up the suspension and reducing the travel to 110mm in the mid-travel mode or even fully locked-out. The Genius is also compatible with both 27.5 and 29 inch wheels with the flip of a chip located in the suspension rocker making it the most versatile bike on the market place!

The aim of the launch from SCOTT Sport Africa’s perspective was to educate their dealers and the media on SCOTT’s new products and to herald a new era of influence in South African cycling. Joggie Prinsloo, SCOTT Sport Africa’s Brand Manager, is bullish about their approach to the year ahead: “We will be going to the next level when it comes to delivering the SCOTT experience to South African cyclists. We want them to experience first-hand the innovation and technology which the SCOTT engineers have made use of when designing each product. We’ll also be backing up the industry leading bikes and components with superb after-sales support and can guarantee the consumer all our products for model year 2018 will be priced very aggressively. We sell innovation, technology and design proposition. At SCOTT we believe there are no shortcuts and we look forward to continuing to proudly live that ethos.”

On the back of Nino Schurter and Jenny Rissveds racing success SCOTT has seen their market share grow in South Africa, but they are not content to let the racing results do all the talking. By empowering their dealers through product education they aim to better convey the technological innovations, which set their products apart, to South African cyclists when they visit their local bike shops. Johan Nel, SCOTT Sports Africa’s Managing Director, is very aware of how the tough financial times have affected the bicycle industry in general and the local bike shop in particular. “We have carefully considered each model we import into South Africa and the pricing of those models to ensure that local cyclists will still be able to purchase SCOTT’s world class innovation, technology and designs at an affordable price. In doing so, and through educating our dealers, we aim to ensure the sustainability of the bicycle stores” Nel said.

The local bike shops, for their part, continue to play a key role in ensuring rider satisfaction, through aftersales support and by bringing the SCOTT experience to the riding community. A unique SCOTT initiative, which helps ensure this, is the service book which handed to a rider upon purchasing a SCOTT bike. All SCOTT bikes have a three year warrantee but this is extended to five years if the bike is serviced by a registered SCOTT dealer annually, and the service book is stamped accordingly.

The SCOTT dealers will also play a significant part in ensuring you get the chance experience the SCOTT lifestyle for yourself. Part of this is through test riding SCOTT’s 2018 range, as SCOTT Sport Africa will once again roll out their demo day programme in late 2017 and into 2018. For more information on these demo days speak to your nearest SCOTT retailer.

SCOTT’s lifestyle approach to the sport sees the introduction of the Head2Toe apparel concept which will allow SCOTT fans to kit themselves out in SCOTT gear from helmets – through sunglasses, tops, bibs and shorts, socks – to shoes. But the SCOTT lifestyle is about more than just the bikes and gear, it’s also about having fun riding, racing hard and spending quality time in the outdoors with friends and family.

The awareness of cycling’s role in a broader sense has led SCOTT Sports Africa to partner with Nino Schurter and the Stander family to build on Burry Stander’s legacy. Schurter, though unable to attend the launch as he was in Cairns, Australia, preparing for the XCO World Championships, sent Duane Stander a personal message welcoming him to the SCOTT family. “Keeping Burry’s legacy alive is about letting the young South African mountain biking community realise through hard work and commitment they too can achieve what Burry, from small town in KZN, achieved” Prinsloo concluded.

Throughout the weekend SCOTT’s “No Shortcuts” motto was reinforced, from the research and development of the bikes and equipment to the selection of the local range; SCOTT’s approach is exhaustive. It translates to unquestionable results – under Nino Shurter for example the Spark RC won all six events UCI Mountain Bike World Cup races, in the Elite Men’s category, in 2017. Plus 19 Absa Cape Epic stages, the Elite Men, Elite Women and Mixed category titles and the Elite men’s and Under 23 women’s titles at the 2016 XCO World Championships and of course two gold medals at the 2016 Rio Olympics, proving the SCOTT Spark RC to be the fastest XCO bike in the world. But more importantly it provides normal riders with products to take their cycling to new levels.