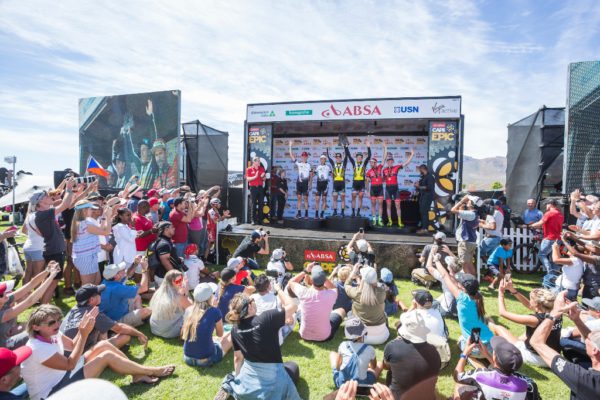 Jaroslav Kulhavý and Christoph Sauser Photo accept the applause as they stand on the second step of the 2017 Absa Cape Epic podium. Photo by Dominic Barnardt/Cape Epic/SPORTZPICS.

When the 2017 Absa Cape Epic concluded at Val de Vie Estate on Sunday the 26th of March the Investec-songo-Specialized team of Christoph Sauser and Jaroslav Kulhavý stood on the second step of the general classification podium. As they had done throughout the event Sauser and Kulhavý competed at the sharp end of the field on the final stage, but when the fresher teams made their brake to claim stage victory Investec-songo-Specialized did not follow the move. Rather they used the final kilometres to reflect on what they had come so close to achieving together.

The final stage was raced at the same furious intensity as every other and there was no rest for the riders with podium aspirations. The Centurion Vaude 2 team of Nicola Rohrbach and Daniel Geismayr were keen to drive up the pace as they sensed weakness in the third placed Kansai Plascon team of Max Knox and Leonardo Paez. Seven teams including Investec-songo-Specialized crested the Fanschhoek Pass together and speaking after the stage Sauser said: “I pretty much knew we would finish second right from the start today. We wanted to win the stage and we tried from the beginning, but I just had no firepower. My body felt good, my head was good, but the legs just weren’t there.”

“It was sandy, and I didn’t expect it to be that hard after the Franschoek Pass. It was very loose and I was already very tired going up Franschoek Pass, then when we got to those loose rolling hills… and you’ve already rode seven days on the limit…” he mused. “It was a pity not winning the stage, but we can be happy with our performance. Unfortunately three hiccups too much…” he concluded.

The second position overall it not the result which Sauser and Kulhavý had hoped for going into the race. But the 2017 Absa Cape Epic saw a dramatic shift in racing tactics; with the short course lap racing specialists, like Shurter and Manuel Fumic driving up the pace from the starter’s gun – unlike in previous years where the marathon specialists have gradually cranked up the intensity over the first hour of racing. Sauser was the only marathon specialist to adapt to the aggressive style of racing and though he is clearly disappointed in the result he is happy to concede that this is his last competitive Absa Cape Epic. “Maybe I come back and ride with a friend, but to train and do intervals to win the masters category, no I won’t do that” he replied. His decision to retire, for a second time, marks the end of an era. It will be a strange occasion when Christoph Sauser lines up in the amateur start groups for the race he helped raise to the premier mountain bike stage race in the world, through his epic battles with Karl Platt for Absa Cape Epic supremacy in the last decade.

The songo.info programme riders, Thando Klaas and Lorenzo le Roux of songo-Investec 1 and Theo Ngubane and Lwazi Ntsakaza of songo-Investec 2, completed their Absa Cape Epic experiences at Val de Vie on Sunday too. Of the four riders only Klaas had competed in the race before so it was at times an overwhelming experience for the other three, as they suffered through extreme heat, head winds and battled their Exxaro category rivals for category honours. Klaas and le Roux finished the race in an uncharacteristic eighth position, which saw them slip off the Exxaro category podium – as the long week of high intensity riding caught up with them. Ngubane and Ntsakaza had never expected to be in the category placing reckoning but they managed to finish a very credible 275th overall – a remarkable result for riders so young and in their first Absa Cape Epic at that too.

You can relive the best moments of the 2017 Absa Cape Epic on the official YouTube Channel. To find out more about songo.info and the charity’s educational and sporting programmes visit www.songo.info or follow @songoinfo on Twitter or like the songo.info Facebook page.