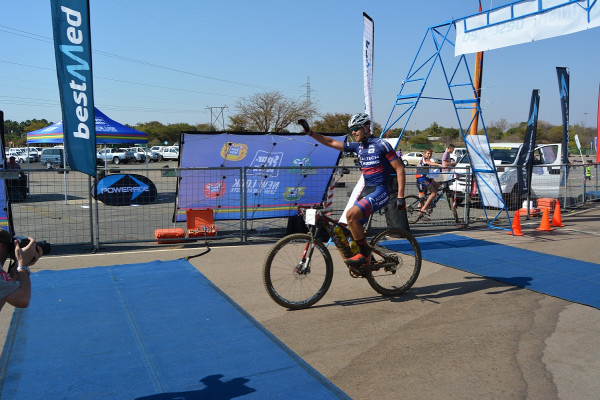 Roadie turned mountain biker Pieter Seyffert showed his all-round racing abilities when he soloed to victory at the Bestmed Lost City mountain bike race in the Pilanesberg region of the North-West Province on Sunday.

Seyffert got away on the first climb of the 55km route and stayed away over the two-lap circuit to claim an uncontested win at the Sun City resort in 1:51:40.

Behind him, a ding-dong battle for second place ensued, with Kai Pritzen fighting off a strong challenge from Kobus Wagner to finish two seconds ahead of his rival in 1:53:59.

Seyffert, who rides in the colours of Altech-Autopage, said the revamped feature route had offered a more technically demanding course with a few additional climbing challenges early on.

“The race started splitting up in the first six or seven kilometres and I managed to pull a gap on the first climb and just kept it to the finish.”

The win is sweet consolation for the 28-year-old Helderkruin resident, who punctured out of the lead bunch with 30km to go in Saturday’s Lost City Cycle Classic.

In the women’s mountain bike race, Bestmed-ASG swept the podium, with Sanet Coetzee making a winning debut for the team in a time of 2:10:52.

Coetzee, who is the national road champion and marathon silver medallist in the 30 to 34 age group, also finished a respectable fifth in the Lost City road race.

“I didn’t know how today was going to turn out because my legs were feeling a bit tired from yesterday’s road race,” she admitted.

“We started quite hard – it was like a cross-country race.”

The 31-year-old said the pace remained flat out over both laps of what she described as a “proper mountain biking” course.

“In the end, it turned out well for me. I won today and I’m really happy about that.”

Both the road and mountain bike feature races formed part of the Lost City Cycle 4 Cansa weekend in aid of the North-West branch of the Cancer Association of South Africa.

They are also part of the Bestmed National Cycling Series.