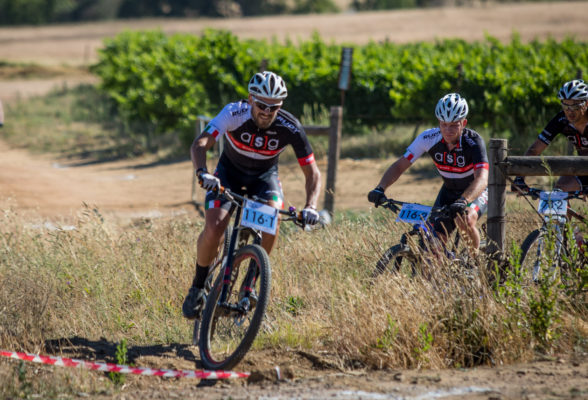 Pieter Seyffert (left) and Hanco Kachelhoffer, of Ellsworth-ASG, will be back to defend their title in the two-day Sanlam MTB Invitational race starting at the Rhebokskloof Wine Estate near Paarl on Saturday. Photo: Warren Elsom/Capcha Photography

Despite not having ridden together this year, Pieter Seyffert and Hanco Kachelhoffer will still make a formidable team when they defend their title in the Sanlam MTB Invitational near Paarl this weekend.

The two-day race, which starts at Rhebokskloof Wine Estate, will have the Paarl Mountain as a key feature on both the 60km and 40km stages.

Seyffert, who won the TransCape alongside Travis Walker this year, said they were ready to renew an old association.

“I had Travis as a partner at the start of the year, but he has since stopped competitive cycling,” said the 30-year-old Ellsworth-ASG rider. “I will be joining forces with Hanco this weekend and next year.

“We’ve been friends for as long as I have been racing, which is about 15 years, and it’s always fun and enjoyable to race with him.

“I think we will gel quite well together but I have had quite a few commitments lately so Hanco might even put me under a bit of pressure.”

Seyffert explained that much of his time had been taken up with the development of an ASG Concept Store in Pretoria, similar to the one run by his teammate in Paarl.

He said he had been heavily involved with the logistics of setting up the store, which had limited his time on the bike.

“We have our official opening later this month and at the moment we are stationed in a small pop-up outlet next to the shop. So that has taken up a lot of time, but we will still be up for any challenges in Paarl.

“We want to compete to the best of our ability in any race we enter and it will be interesting to see what sort of competition we are up against.”

The organisers tested the two-day racing concept for the first time in last year’s Sanlam MTB Invitational and Seyffert gave the idea his stamp of approval.

“I think this concept is amazing, especially for the guys who have to travel far and don’t want to do just a one-day race. The two-day event is a great initiative.”

He added that he was looking forward to taking on the trails of the region, which have been tweaked to introduce some fresh challenges.

“It’s always a tough route because it’s all about tackling the Paarl Mountain, where you go up and down with a number of kicks and climbs on the course.

“Last year, I remember, there was thick sand in some stretches, as well as loose rocks, so you have to be careful. But all in all it’s an amazing route.”

For further details, go to www.sanlammtbinvitational.co.za.