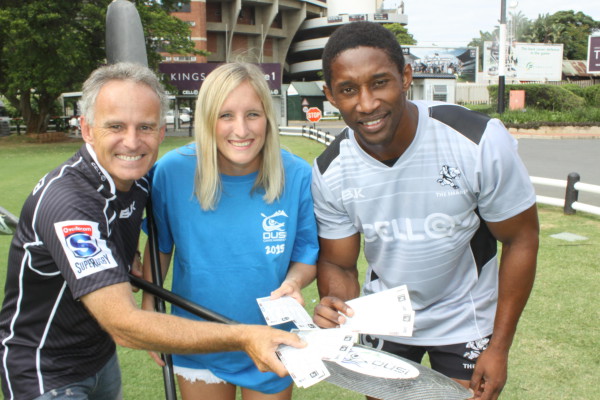 Paddling personality Dave Macleod (left), paddling star Jenna Ward (centre) and Cell C Sharks wing Tonderai Chavhanga (right) are excited about the 2015 Dusi Canoe Marathon as well as the chance to head to Growthpoint KINGS PARK after the finish at Blue Lagoon on Saturday as The Sharks take on the Emirates Lions later in the evening. – Nick Tatham/
Gameplan Media

Pietermaritzburg – In a repeat move that will bring a smile to weary Dusi Canoe Marathon paddlers faces as they cross the line at Blue Lagoon on Saturday, the Cell C Sharks will once again supply tickets to participants so they can enjoy a trip to Growthpoint KINGS PARK as their beloved Sharks take on the Emirates Lions in their second Super Rugby clash of the season.

Cell C Sharks CEO John Smit is excited by the fact that there will be an influx of people in Durban this weekend and felt it was an opportunity for The Sharks to get involved in one of KwaZulu-Natal’s annual majors.

“The Dusi Canoe Marathon is one of the hallmark events in KwaZulu-Natal,” Smit said. “With a lot of local paddlers taking part it felt right that we give participants the opportunity to come and support their favourite rugby team and unwind at the Shark Tank after three long days in a boat!”

The Sharks are set for another crunch South African derby against the Johannesburg based Lions and are keen to get a season-opening victory under their belt.

“The Dusi and the Cell C Sharks are two brands that are synonymous with KZN and with Blue Lagoon within such a close proximity to the stadium, people will already be in the area and hopefully our gesture will aid in them enjoying their impressive achievements while also spurring our boys on.”

“It is a big game for us and following the Dusi’s prize giving at Blue Lagoon and a few cold refreshments, we look forward to paddlers making the short trip down the road to come and support The Sharks,” Smit mentioned.

Dusi General Manager Brett Austin Smith also embraced the idea of giving the paddlers tickets and getting them to the ground to enjoy an evening of rugby at the Shark Tank to support newly appointed Director of Rugby Gary Gold’s men in black and white.

“It’s a really great initiative. Last year it was a huge success and it will be great to see the paddlers back this year to pack out the stadium as the Sharks take on the Lions!

“It should prove to be a great evening and a great way to unwind after a long three days on the river,” Austin Smith added.

The 64th edition of the Dusi Canoe Marathon takes place from Camps Drift in Pietermaritzburg to Blue Lagoon in Durban from Thursday 19 to Saturday 21 February 2015. More information can be found at www.dusi.co.za