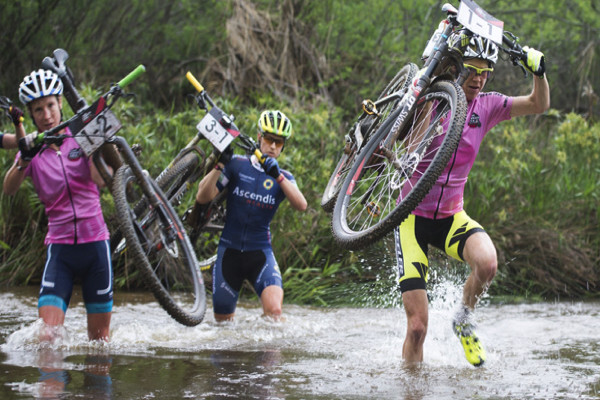 Top competitors from abroad, such as former world champion, Esther Suss (right), are expected to contest the prize money and rankings points on offer for top finishers at the Cape Pioneer Trek international mountain bike stage race to be held in South Africa from 16-22 October.
Photo credit: www.zooncronje.com

The route for the eighth Cape Pioneer Trek international mountain bike stage race has been revealed and it’s shorter than any of the previous editions. This is in line with an ongoing quest by the organisers to offer quality over quantity and a more rewarding racing experience.

The seven-day race, from 16–22 October, once again carries International Cycling Union (UCI) grading, which means guaranteed minimum prize money, television coverage and UCI rankings points for the top finishers. This ensures a strong international field will be on the start line and also sees the rest of the field benefit from the exceptionally high standards.
This year’s race will cover 496km over the seven days (including the prologue) and will include a total 9 620 meters of vertical ascent. As it did in 2015, the route will kick-off with a coastal prologue at Mossel Bay and will finish seven days later in Oudtshoorn. The in-between days have a new complexion, with the organisers opting for multiple night stay-overs to ensure a more relaxed off-the-bike environment for riders.
“In the early editions we tried to make the Cape Pioneer Trek the toughest stage race in South Africa. And it wasn’t difficult to do that with the kind of rugged terrain and long, steep gradients we have in the Karoo. But we realised a few years back that route distance wasn’t as important to riders as route experience and began to fine-tune the race, steadily making it shorter and faster,” said Henco Rademeyer of Dryland Event Management, the company that owns the Cape Pioneer Trek.
“We take our rider feedback very seriously. After the 2015 race, when creating the 2016 event, we kept what the riders loved and changed a few things that will make their race more enjoyable, but no less challenging on the bike,” added Rademeyer.
After including the Swartberg Pass in the last few editions – and actually summitting the iconic mountain twice on consecutive days last year – the organisers have opted to exclude it from the 2016 race. This allowed them to design a more compact route, which will be focussed around three towns, Mossel Bay, George and Oudtshoorn. As the crow flies, the towns are all fairly close together, but they occupy very different ecospheres, which will see riders tackling a huge variety of terrain and gradients – and possibly weather.
From flat beach sand to the shaded indigenous and planted forest slopes of the Outeniqua Mountains; from firm loamy soil to hard, loose rock; from moist coastal air to the hot, dry desert atmosphere, the contrast will remain extreme and very much signature Cape Pioneer Trek.
“The route, although shorter, will be just as challenging as before. Shorter distances usually translate to a faster average race pace and a higher intensity of competition. We’re also developing a lot more new singletrack sections, which makes for a higher skills challenge too. We have an increasing number of strong international riders entering the Cape Pioneer Trek each year, as well as from other regions in South Africa. We love to show off our beautiful part of the country with scenic and dramatic route choices that make the experience even more memorable,” added Rademeyer.
Cape Pioneer Trek 2016 route summary:
Sunday 16 October, Prologue
Mossel Bay Beachfront: 13km, 320 metres ascent
Start and Finish: Mossel Bay Beachfront
Similar to 2015, Day 1’s route will be incredibly scenic with some stunning singletrack above the Indian Ocean coastline as well as the passing of some local historic and cultural landmarks and memorials.
Monday 17 October, Stage 1
Mossel Bay–Mossel Bay: 94km, 1 650 metres ascent
Start: Milkwood Primary School, Mossel Bay. Finish: Milkwood primary School, Mossel Bay
Day 2 will showcase the Mossel Bay area, especially the new singletrack sections through Gondwana Private Game Reserve, where Africa’s Big Five roam free. Don’t underestimate this stage, it’s still tough but very rewarding. The night is spent on the water’s edge before the journey continues.
Tuesday 18 October, Stage 2
Mossel Bay–George: 99km, 2 200 metres ascent
Start: Milkwood Primary School, Mossel Bay. Finish: Van Kervel High School, George
Day 3 is likely to be the toughest of the race with over 2 000m of climbing in just under 100km. This day will include a beach riding section, more game reserve sections and indigenous forests, finishing with some fast singletrack.
Wednesday 19 October, Stage 3
George–George: 56km, 1 150 metres ascent
Start: Van Kervel High School, George. Finish: Van Kervel High School, George
Day 4 is the shortest stage but will include 90% singletrack. The race often visits George but never has it truly made the most of the amazing, established forest singletrack in the capital of the Garden Route region.
Thursday 20 October, Stage 4
George–Oudtshoorn: 93km, 1 700 metres ascent
Start: Van Kervel High School, George. Finish: Langenhoven Gimnasium, Oudtshoorn
Day 5 is a return to the 2009 route between George and Oudtshoorn, which includes the historic Montagu Pass and the new singletrack sections at Herold Wines. The views are spectacular and the descents near the end are thrilling.
Friday 21 October, Stage 5
Oudtshoorn–Oudtshoorn: 84km, 1 400 metres ascent
Start: Langenhoven Gimnasium, Oudtshoorn. Finish: Langenhoven Gimnasium, Oudtshoorn
Day 6 takes riders towards the Kamanassie mountains, but for the first time years, the race won’t venture into the wilderness reserve, but will instead circle the Kamanassie Dam and pass through another private game reserve.
Saturday 22 October, Stage 6
Oudtshoorn–Oudtshoorn: 57km, 1 200 metres ascent
Start: Chandelier Game Reserve, Oudtshoorn. Finish: Queens Hotel, Oudtshoorn
Day 7 sees the start at Chandelier Game Reserve, home to the Fairview Attakwas Extreme MTB Challenge. This shorter stage includes many jeep track climbs and singletrack descents, with a fast and furious dash to the finish at the Queens Hotel in the town.
Total distance: 496km.
Total elevation: 9 620m
For more indepth route descriptions of the 2016 race, visit www.capepioneer.co.za where you can also enter in either Team or Solo divisions.
Cape Pioneer Trek featured mountain bike stage race 2016-03-03
Tiaan Pretorius