Siblings set to take each other on at Drak Challenge 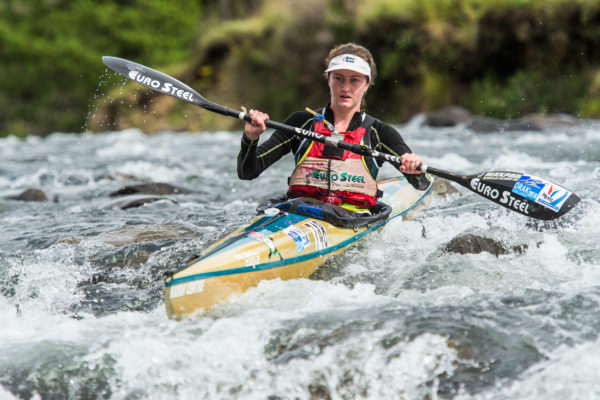 Cana Peek in action in the 2016 N3TC Drak Challenge. She will be racing her older sister Jordan in the 2018 edition of the race, before teaming up together for the FNB Dusi in mid-February.“Jordan has taught me everything, so I know exactly what she knows,” she said. Anthony Grote/ Gameplan Media

Underberg – Brothers Alan and Andrew Houston and sisters Jordan and Cana Peek might be partners for the upcoming FNB Dusi Canoe Marathon in February, but come the N3TC Drak Challenge on 20 and 21 January they will be staunch adversaries on the uMzimkhulu River.

“Drak is such a prestigious race in KZN, and my favourite K1 race of the year,” said Andrew Houston. “I am definitely going to give it horns to try and better the fifth I got two years ago.”

He said that while he and his younger brother Alan were close and a great K2 combination, there was no quarter asked or given on the Drak as they compete against one another.

“I have made it clear that if we are racing each other at the end then he has to let me take the win,” said Andrew. “It’s part of our DNA. I am the big dog in the family. I am the older brother, the dominant male. It is just how humans have evolved.”

“I don’t care where I come, as long as it is in front of my big brother,” said Alan provocatively. “If we happen to be on a bunch together then I might look on him leniently, and look after each other.”

The Peek sisters see the Drak as one of their favourite races of the year, but more as a key part of their Dusi training than a bid to get their names onto the women’s trophy, even if the women’s race is one of the most open contests in many years.

With Jordan targeting a top five finish and Cana eyeing a place in the top ten, the sisters say that sibling rivalry plays no part in their race tactics.

“This is a bittersweet thing, because Cana knows what all my weaknesses are, and I know exactly what her weaknesses are” said Jordan.

“Jordan has taught me everything, so I know exactly what she knows,” confirmed Cana. “So it will all come down to raceday.”

“There is always good sportsmanship between us on the water,” said Jordan. “I would never cut her off, and we always help each other.”

“When I was racing my first Fish Jordan stayed with me the whole way down the first half of Day One to show me the lines,” recalled Cana.

“Maybe I should make her some tea the night before and poison it” jibed Cana.

“I’ll make you some chicken and just not cook it,” retorted Jordan.

The N3TC Drak Challenge starts at Castleburn on Saturday 20 January with a 24 kilometre stage to Sinister Pool, just above the Swartberg Road Bridge. The second stage on Sunday 21 January is 36 kilometres finishing at Early Mist Farm close to Coleford resort. More information can be found at www.drak.co.za