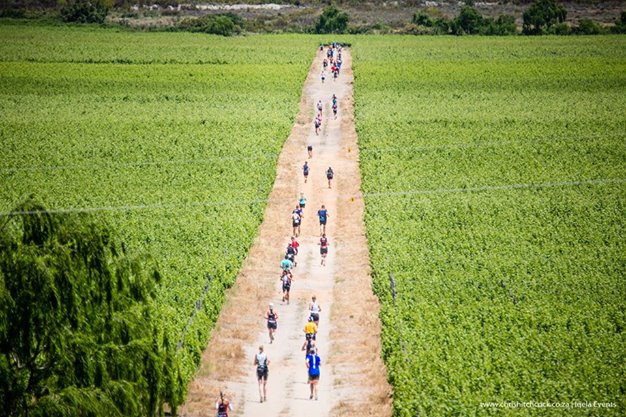 25 October 2014, Slanghoek Valley outside Rawsonville was the setting for one of the most anticipated triathlons of the year. A perfect location surrounded by the picturesque Slanghoek Mountains, set the scene for what would be one awesome race.

The morning started out perfect with a slight wind, but nothing to hectic to put one off for the race ahead. I am normally a road triathlon fanatic and decided this year to switch things around after a disastrous Ironman South Africa attempt. This would be the first time I did the MTB course and without really looking at any route profiles, not sure if there were any, and listening to reports from previous years it sounded like a nice, not to technical ride. I was familiar with the run route, although it has changed for the 3rd year in a row and was feeling comfortable with the race ahead.

I must admit that the bottle of red wine I had the night before did help a little with the nerves, but did not help with the headache. I knew everything would be good as soon as I had my warmup swim. True as BOB, as soon as I got in the water I was feeling like a champ, a unfit champ, but a champ non the less. Standing at the start of the swim and looking at my fellow competitors I got calm about myself. This will not be as a hectic swim start as with a normal road triathlon, seems that the Off-road scene still need some more publicity. The swim is 2 laps of 600m with a transition off a high diving platform. This provides entertainment to the crowd supporting the athletes, that unknowingly are embarking on a day full of surprises and unknown territory. 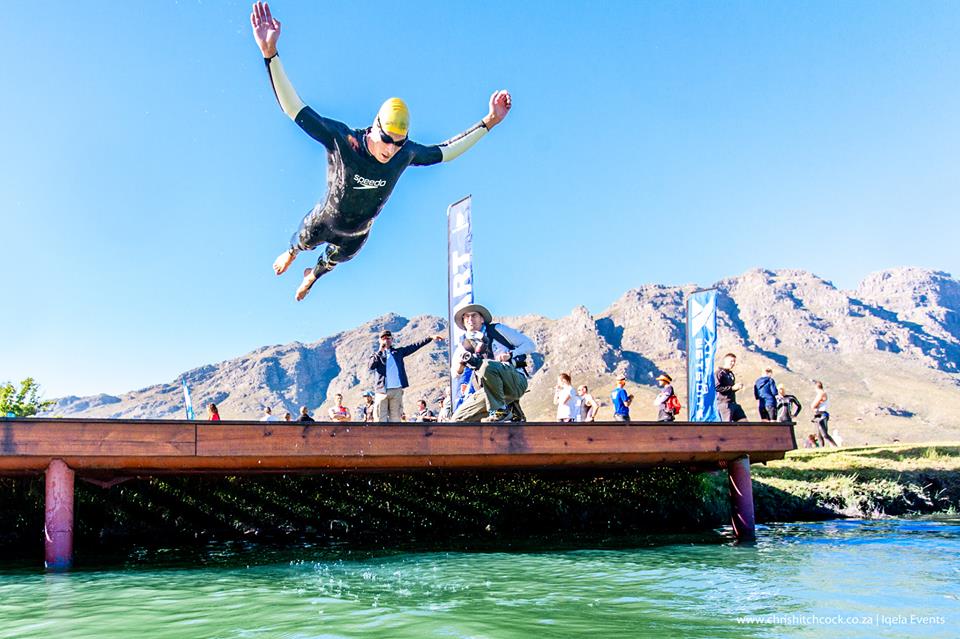 The swim was awesome, with less people you were able to find open water very early in the race and the first buoy was a pleasure with no fists to fight off. The rest of the swim was equally fun, with a lot of open water it was easy to find your stroke and enjoy the race.

Getting into T1 I was lying in a good position, but the amount of time lost in trying to get all my Mtb kit on cost me a couple of places that I would have to make up on the easy, not so technical mtb bike course. I was feeling really good getting on my bike and setting off on the supposedly 25km bike, easy and not so technical bike course. This is where the rude awakening suddenly made its appearance. They have changed the bike course from the previous year!!!!!! Starting off with a small climb that quickly became single track and stuck behind some over enthusiastic competitors, some was quickly forced off their bikes into a walk up the first hill. At this point I was able to pass a couple and my race could get underway. I started thinking that this might become a long day out. With a lot of loose sand and taking you straight up over the mountain with some serious climbing in the first 8km, the race quickly spread the strong MTB riders from the average riders. At the top of the climb through the Goudini Spa we were taken into what would make the day’s ride really special. Some awesome single track, taking you down the mountain with some awesome views overlooking the Worcester and Rowsonville Valley.

This would be short lived with the road taking you onto the back farm roads. About 5km of really straight and fast gravel roads made for some high speed, candle burning fun and then back into the last bit of single track taking you to T2, or so we thought. Getting back on to the tar road on about 24km on the clock and about 2km to go, I started planning transition dropping the big gears and getting the legs ready for the run. This is where the organizers, Iqela Events, decided that we did not get enough for our money. Some dude in a RED vest was standing in the middle of the road, about 1km to go to T2 with his RED flag pointing in some other direction. That is correct; we would have to climb the mountain again!!!!!! With some quirky comments from the official “not too far to go”, but pointing his flag straight up the mountain, I started what would be about +-1km of serious climbing with some very unnecessary switchbacks. After a couple of tumbles and a walk or 2 I reached the top. Now it was downhill home to T2. Getting into transition and thinking “ that was not what I was expecting, but what an awesome ride!”. 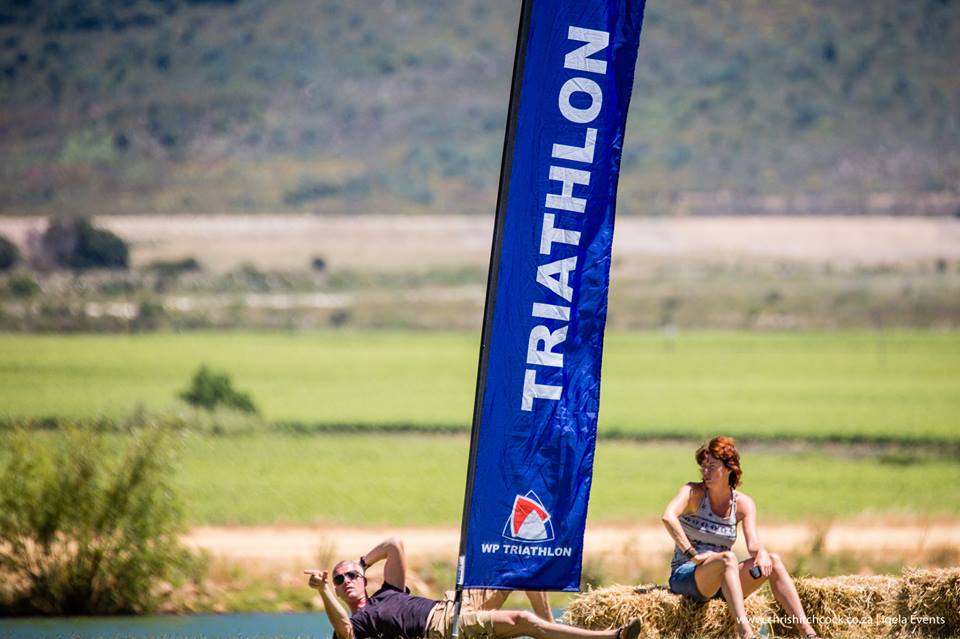 Without supporters and the wonderful WP race referees these events will not be happening – Photo Credit: Chris Hitchcock

As I was heading out on the run with legs feeling strong and thinking that nailing this run would be possible, I soon realised that the lack of Brick runs would soon force me into a walk. The first 2 km was tough with some loose sand and the hammies feeling like they are going to tear off. At the 3rd km I was getting my legs back, but already lost a lot of time trying to walk my hammies into gear. Now it was al about keeping the pace and finishing the race in style and under 3 hours.

This is definitely a race I would put on my calendar and the bike course puts it up there with the best. Thanks Iqela for a great day out!

This is definitely a race I would put on my calendar and the bike course puts it up there with the best. Thanks Iqela Events for a great day out! Also a big thanks to all my sponsors 32Gi, Puma South Africa and 2XU. A big shout out to my team mates at Tri-Plex Sport. 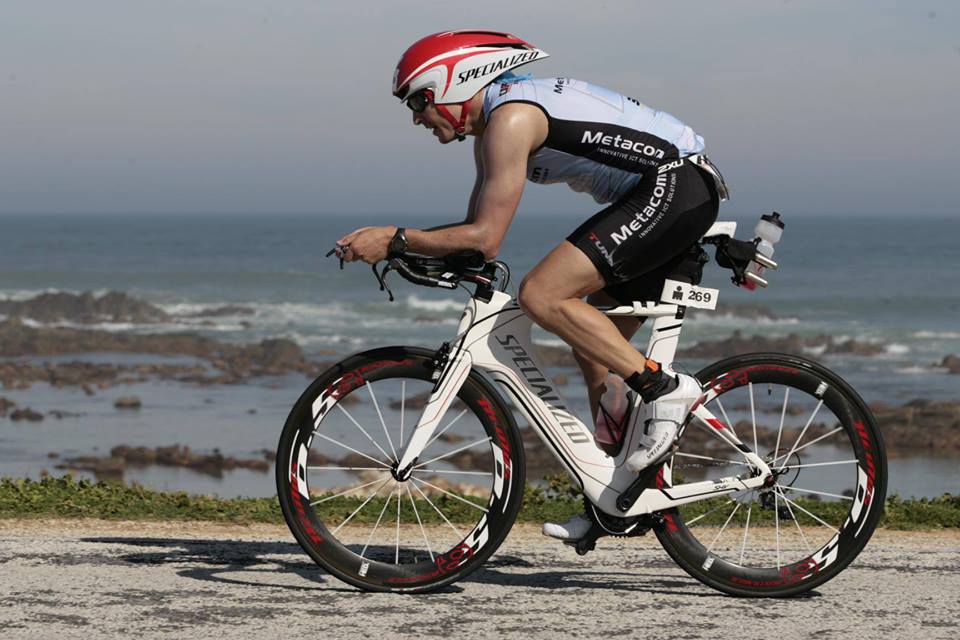 Hermanus at the 2014 Ironman South Africa