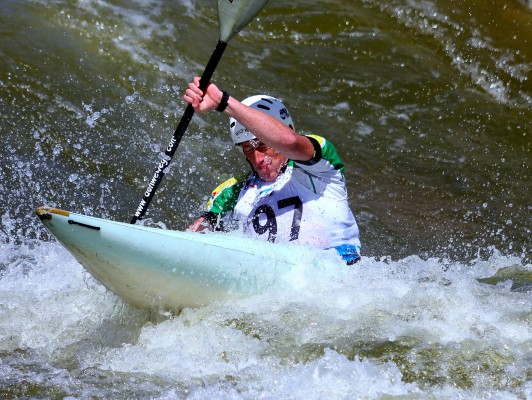 With five South African Slalom titles to his name Max Paddle/Second Skin star Don Wewege (pictured) along with Success Mahlaba will take on the best in the world at the upcoming ICF Canoe Slalom World Championships at the Lee Valley White Water Centre in England from 17-20 September. Ettore Ivaldi/Gameplan Media

Durban – Following the impressive showing from the South African team at the recent ICF Canoe Marathon World Championships it is now the chance of the slalom paddlers to prove their worth as the small contingent of paddlers head to Lee Valley White Water Centre, England to take part in the ICF Canoe Slalom World Championships from 17-20 September.

The team of two paddlers includes five-time and reigning South African national champion and European regular this season Don Wewege as well as the lesser known Success Mahlaba. Both have been in Europe for a while racing as well as training with Wewege looking forward to the challenge of the 2012 London Olympic slalom course.

“The water is massive and pretty technical,” he mentioned. “With that said training has gone well on the course so far and both myself and Success are hoping that we can reach the semi-finals at the World Champs.

“This is going to be crucial for us due to SASCOC’s Olympic qualification policy and the ICF will choose the Olympic quotas from the semi-finals so it is now or never for us!”

Wewege and Mahlaba have been hard at training in Europe as the European summer draws, giving the pair the confidence to try challenge for those semi-final berths.

“I have been in Europe for three months now, preparing for this event, traveling around as part of the ICF Talent ID Program.

“We have been based in France mostly but have raced in four World Cup events as well.

“The opportunity has been amazing and I must say a massive thank you to my sponsors and parents for this opportunity!

“Without the ICF TIP program neither Success nor I would be here as most of our trips are largely self-funded,” Wewege added gratefully.

The Max Paddle/Second Skin star understands the challenge that both he and Mahlaba face however with a shot at Olympic qualification on the line, Wewege is going to be under pressure to produce his best ever result at a World Championships.

“Our hopes are to get into the semi-final although, with the field assembled, it will be a big ask!

“Only 40 boats qualify for the semi-final and there are 113 K1 men racing!

“There are 78 C1 men competing in the opening rounds and the semi-final cut is 30 boats,” he mentioned.

When asked about the conditions that they had been greeted with in the UK Wewege replied with a fairly innocuous response.

“Weather wise it’s the standard British autumn – cold with rain, sun and clouds all mixed into one! “ he chuckled.

The pair will be in action on Thursday and Friday despite the competition commencing on Wednesday. Wewege will compete in the K1 as well as the C1 category while Mahlaba will focus his attention on his K1 efforts.

Should either or both of the pair then advance to the semi-finals, they will then continue their World Champs efforts on Sunday.

There will be a live stream on the Planet Canoe Youtube Channel here as well as live results on www.canoeliveresults.com