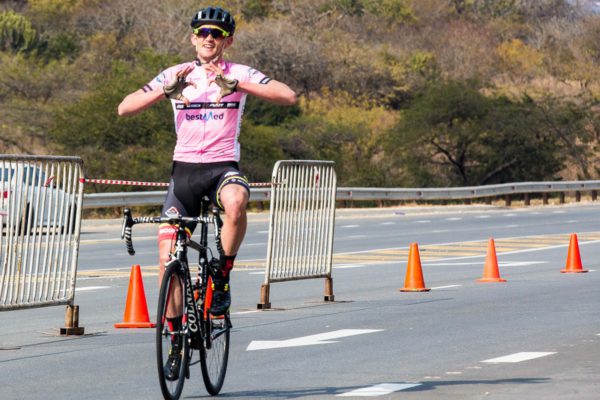 Willie Smit retained his title in the Bestmed Jock Tour after wresting the initiative from overnight leader Nico Bell on the final climb before the fast finish into Nelspruit, Mpumalanga, today.

After finishing third in the opening day individual time-trial, RoadCover’s Smit rode himself into contention for overall honours when he won Saturday’s taxing second stage to end the day seven seconds behind Team NAD’s Bell.

In today’s final stage over 138km, which featured a mammoth 3 100m of vertical climbing, the Nelspruit local bided his time until the peloton closed in on the summit of the feared Hilltop.

With team-mate Mornay van Heerden setting up his decisive attack, the 23-year-old was able to gap Bell on the steep ascent and maintain his advantage all the way to the finish to win the stage in 3:55:36 and, with it, the overall title in 8:44:15.

Bell, who won the nine-day joBerg2c mountain bike race in late April, fought gallantly to place runner-up on the stage in 3:56:06 and overall in 8:44:38.

ProTouch’s JC Nel, who won the first stage on Friday, finished third in 3:56:59, but the cyclist from Honeydew in Joburg did not do enough to displace Van Heerden, who ended third in the general classification in 8:46:35.

Smit’s victory in what is considered South Africa’s toughest road stage race came after a lengthy rehabilitation period following a crash while racing in France in April.

The double Jock Tour champion has also been suffering with an upset tummy, but said the pace at the start of today’s stage had played into their hands.

“The start was fairly easy so it wasn’t too tough on my stomach,” said Smit. “It wasn’t that hot so I didn’t get too dehydrated and did not have to take on that much liquid.”

He said his main objective was to conserve as much energy for the final climb, which topped out about five kilometres from the finish.

“Unfortunately there was a bit of a headwind on the climb, but I knew what I could do on the last section so I just had to keep some power for the last bit up Hilltop.

“Mornay, one of the youngsters on our team, was the last line for me on the climb and he made sure it was really hard before I took the lead and controlled things in the breakaway.

“I managed to make 10 to 15 seconds on the climb and was able to maintain that gap to the finish.”

Smit said a lot of hard work had gone into winning the Jock Tour for the second time.

“It’s not something that just happens,” he said.

“You have to work for it and you deserve it at the end of the day. But there’s a bit of luck involved as well.

“I’m riding with a great group of guys and that motivates me and makes it all worth it.”

He said he had received strong support from his team-mates to help him conserve as much energy as possible throughout the race, which is presented by Rudy Project.

“It’s all about marginal gains.

Smit said he was now fully recovered from his injuries and that these no longer played a role.

“It’s more my tummy problems which is a chronic condition and it comes and goes. It comes from stress, but in this sport there is always pressure so it’s something I just have to try to manage.”