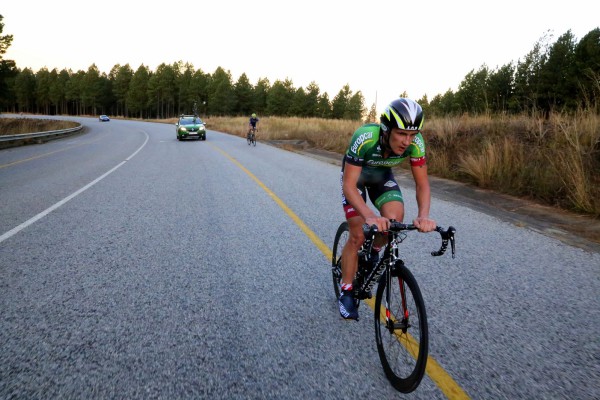 Nelspruit local Willie Smit gritted his teeth into a punishing headwind to post the fastest time in the 27km individual time-trial that opened the inaugural Bestmed Jock Tour, presented by ASG, in Mpumalanga on Friday.

Smit clocked 57:03 in the hilly test between his hometown and the top of Kaapsehoop to give Team EuropcarSA the yellow jersey by almost 50 seconds.

Another Nelspruit native, Nico Bell of RECM, was second quickest on the day in 57:51.

Stefan de Bod rounded out the podium for MTN-Qhubeka in 58:18.

“I think the Jock is one of the hardest tours in South Africa, so just to finish the race is going to be tough,” said Smit.

“I really worked hard, so for me to push through and get the stage win, I’m really happy for me and the team.”

He said a strategic bike change around the halfway mark had given him the edge on the route, which featured a total ascent of 1 200m.

“Because of the headwind, I didn’t want to spend a lot of time on the time-trial bike on the climb.

“I lost about 15 seconds with the changeover but I definitely benefited from my decision in the last three kilometres.”

The 22-year-old said riding a successful time-trial was all about marginal gains.

“My main focus was just to sit there and grind and not stand at all because every time you stand, you lose a second or two.”

Smit said his result had given his team a boost but that anything could happen over the two remaining road stages.

“I don’t think we’ll necessarily go for the stage wins because we need to defend the jersey.”

He said his local knowledge was counterbalanced by the fact that he was a bigger rider, who found the Lowveld climbs heavy going.

On Saturday, the 140km second stage takes riders from Mbombela Stadium through White River and Sabie before returning to Nelspruit via Long Tom Pass.