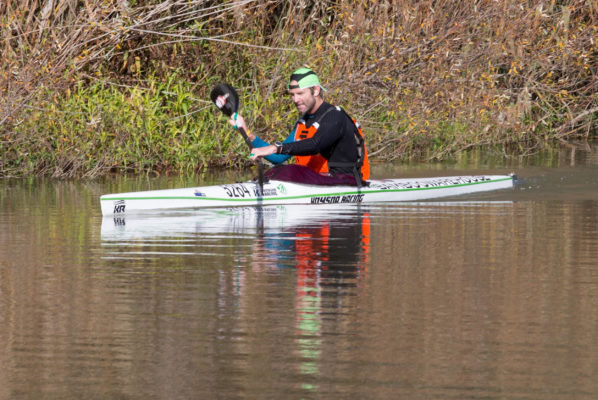 Bamboo Warehouse/Knysna Racing’s Graeme Solomon will hope to notch up his fifth Breede River Canoe Marathon title when he and Knysna Racing/Merrell’s Greg Louw team up for the Robertson to Swellendam clash on 3 and 4 September. John Hishin/
Gameplan Media

Robertson – Graeme Solomon is looking forward to getting his Breede River Canoe Marathon title defence underway with yet another new doubles partner, Greg Louw when this year’s race from Robertson to Swellendam in the Western Cape takes place on 3 and 4 September.

“On paper, I’d have to say Jasper (Mocké) and Stu (MacLaren) are the boat to beat,” says Bamboo Warehouse/Knysna Racing’s Solomon. “Greg and I are 100% out there to go for the win ourselves though!”

Should he and Louw go on to achieve their goal, it would be Solomon’s fifth Breede title – all with a different partners – having already won in 1999, 2004, 2012 and last year, with partners Paul Marais, Dawid Mocké, Sean Rice and MacLaren respectively.

Having been part of many successful partnerships throughout his career and all too aware of the importance of a pair being in sync, Solomon is pleased with how things have started for himself and Louw.

“The combination is key when it comes to doubles racing.

“Two weekends ago Greg came down for the three pre-Breede races in the weekend and it was really great that from stroke one, we were comfortable in the boat together.

“We’re also on a very similar wave length. Greg recently also became a father, we’re both businessmen and have been around for a while, so we can have conversations about things other than paddling.

“And then from a paddling perspective, Greg is a super athlete, has incredible river skills and bucket loads of speed to match!

“You’ve got to choose your partners wisely when you get to my age,” chuckles the 43 year-old campaigner.

While having been disappointed with his fifth place finish in his K1 at this year’s Berg River Canoe Marathon in July, Solomon is refreshed and raring to go ahead of the upcoming Cape Winelands and Overberg clash.

“Berg wasn’t great for me but I took a bit of a break after that and now I’m really looking forward to the Breede.

“Breede is a completely different race to the Berg. There is bunch racing, a couple of tight channels and some long, flat pools as well.

“It’s got a little bit of everything and if you want to win, you need to be good at it all.

“You need to know how to win the Breede, which Greg and I do after Stu and I went nicely last year and Greg won with Andy Birkett the year before.

“It will be very competitive again this year – it always is at the Breede.

“Let’s just hope we get some water before the race,” a hopeful Solomon adds as the drought currently gripping much of the country continues to result in low river levels.