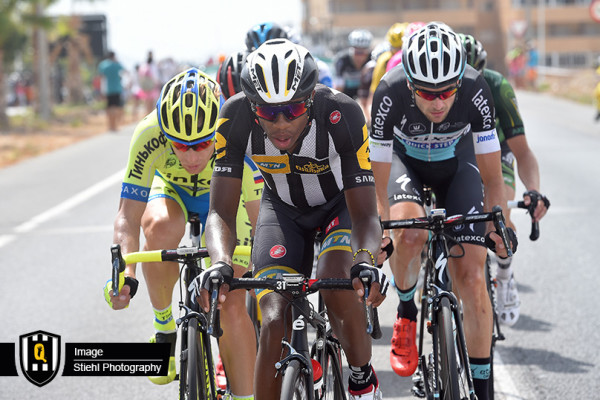 Songezo Jim becomes the first black South African to finish a cycling grand tour, these are his thoughts:

Getting to my first grand tour was something I really worked hard for so to finish it now, it is a pretty amazing achievement. I am really happy to have made it to Madrid.

When I first started the Vuelta I thought I’d just be there trying to finish but I was also happy with my performance. I was there to help the team when needed, getting bottles and with Louis doing so well on the GC it was important that we all did our part. I also made it into two breakaway’s, on stage 9 and stage 18. The first breakaway was good for me because I was still feeling relatively fresh so I enjoyed that day.

A grand tour race is different to any other professional race though. Firstly it is a World Tour level event so the standard is really, really high. Then there is the duration, for three weeks you racing at that level so it really takes a lot out of your body. I got sick before stage 16, which was a really difficult stage so I was stressing a bit since then because I never really got 100% healthy again but I am happy I made it through. It was going to take a broken bone to stop me from getting to Madrid, I think that was the only thing that could have stopped me from finishing this race.

This was only my first grand tour but I already know I want to do more grand tours. The longer the stage race is, the better I get. Normally I only do 7 to 9 days but a grand tour is 3 weeks. I hope to get used to this type of racing because I want to win a stage in a grand tour in the near future. From what I could I see, I just need to up my level a bit more because you could see the breakaway’s making it in the final in the 3rd week. I was there in the break on stage 18 which was good, but I just couldn’t stay with Nicolas Roche and them at the end so I need that extra depth still.

It has been a memorable 3 weeks for me and I want to thank all my teammates and our staff. The staff have always been there for us, helping us to perform our best every day. Our Chef, Soren, he was fantastic in preparing our food every day. The food is one of the most important things as it keeps you going. If you don’t eat well you won’t recover well and then you also not going to ride well. So he was great but everyone on our team was as well.

A lot of people have said that finishing your first grand tour boosts your engine a bit, so I am confident in my progression as bike rider. Right now, I’m not 100% healthy after the race but I’m going home now and I’ll relax for a couple of days and get healthy again. Then I have 3 Italian races and the Abu Dhabi Tour, hopefully I can have a good race in Abu Dhabi as it will be my last race of the season before I go back home to South Africa for some proper rest.

To end off, I really want to thank my girlfriend Khusela Ngubelanga for all the support, she’s been there for me every day during the Vuelta supporting me. She doesn’t understand too much about cycling but she was always there, asking questions and my aunt also, Nomfundo Nonjojo so I want to thank them especially. Then to all the fans and people back home who have been sending messages, thank you for the support. I don’t know if I could have finished the Vuelta without your support.