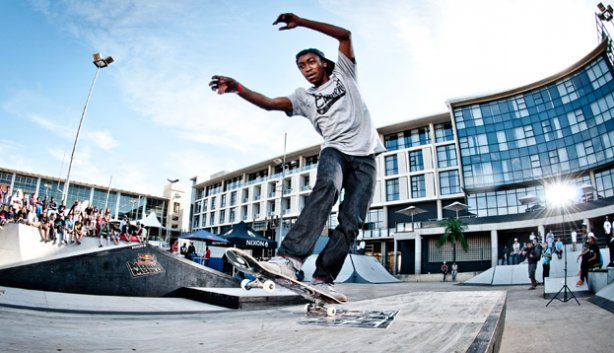 The establishment of the South African Skateboarding Federation (SASF) this week will assist in governing and managing the rapidly growing skateboarding community in South Africa.  Key local skateboarding groups such as The National Skate Collective, SAGRA, Africa Skate and community-based street skateboarding structures formed part of the process.

Under the interim chairmanship of Capetonian Marco Morgan, the SASF will provide representation for all skateboarding disciplines including street, vert, and longboarding.  According to Morgan, the growth of skateboarding is evident.  “Now it becomes important that we manage the direction in which skateboarding grows. The SASF will represent an independent body and serve the interest of the skate community and the sport.  I think the establishment of the federation is a massive win for skateboarding as it provides the legitimacy that the local scene has needed.  The federation will be properly constituted and we are calling for nominations for full elections from interested parties,” explains Morgan.

As an organisation, SASF will interface with governance bodies like SASCOC, provincial sports councils and city planners on skateboarding issues relating to the use of public space, including advice on building of skateboard parks and skateboarding regulations as well as ensuring proper representation of South African skateboarding at international events and conferences.

Gabi Murray-Roberts, board member of SAGRA (the South African Gravity Racing Association) supports this initiative.  “Having understood all the details involved, it is clear to me that this is for the good of skateboarding as a whole and at the end of the day, it’s the skaters who are going to benefit.”

According to Tim McFerran of World Skateboarding Grand Prix, the need for a government body has become quite apparent.  What spurred the huge growth in skateboarding in South Africa was the Northern Cape provincial government, who brought a large scale skateboarding event that was televised globally to Kimberley, South Africa for the purpose of promoting tourism and social development in the Northern Cape Province.  This world championship event started a domino effect for skateboarding around the country as the whole skateboarding industry benefited and grew exponentially. “This explosive growth of the sport in the country, due to the Kimberly Diamond Cup presented by Kumba Iron Ore and other local events like Hot Heels Africa and Ultimate X, has necessitated the establishment of a governing body to help with organisation of the industry and to provide input to skateboarding around the country.  I think it is crucial for the continued growth of skateboarding in South Africa and the sport to have one voice to represent the all the disciplines of skateboarding,” mentions McFerran.