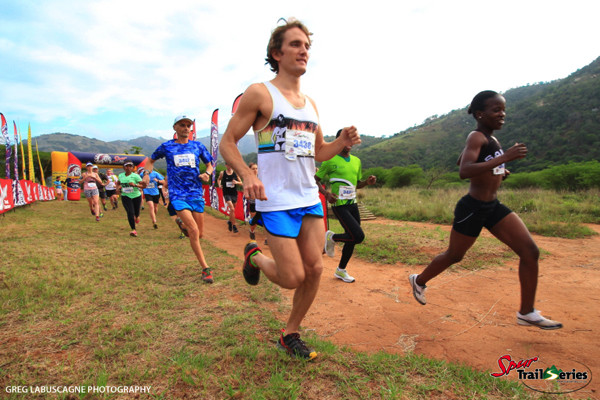 Runners take off at race 4 of the Spur KZN Trail Series®. Image by Greg Labuscagne

The fourth Spur KZN Trail Series® came to a conclusion this Saturday in the Valley of 1 000 Hills at the tranquil setting of iSithumba.

In the men’s 11.3km long course Championship race, Eric Ngubane made it three wins out of three as he wrapped up another first place in a time of 48:59 to take the overall Series win before jetting off to France to represent South Africa in the 75km Grand Trail des Templiers. In the ladies race, all was set for an epic battle between Puseletso Dladla and Zoe Papadakis with Dladla leading the overall standings with only 29 seconds. In the end, it was Dladla who put the hammer down and claimed the overall win in a time of 58:06, with Papadakis coming home second in a time of 01:04:07.

Owen Bengo powered his way to yet another win in the men’s 5.3km short course Challenge as he whipped his way around the course in a mere 19:59 to take the Series title while Tholakehle Shandu claimed the ladies Series with her time of 31:49.

It was a superb end to another fun Series in KZN and we can’t wait to head to Gauteng to kick of the Spur Gauteng Summer Trail Series® this Sunday.

Click here to read the full report and here to find out more about the Spur Gauteng Summer Trail Series® now.