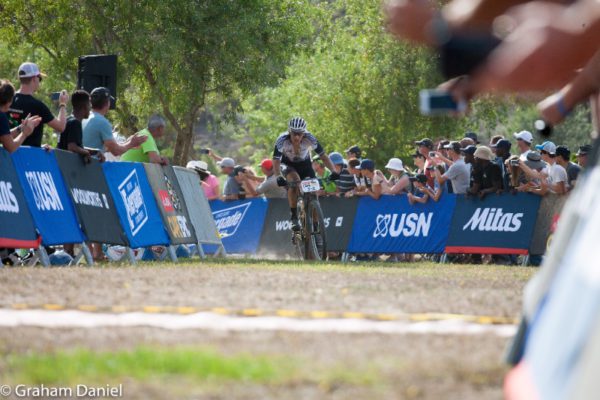 Jaroslav Kulhavy was able to get to the front in the tricky single track (bridge crossing) leading into the “temporary” finish line and claim the stage win.

The call to shorten Stage 2 of the Absa Cape Epic was made on the morning of the stage, based on the forecast heat and the concerns of the Medics around the safety of the riders in these conditions. Stage 1 had 76 teams not make the cut off time.

Harden Epic riders took to social media to suggest that the shortening of the stage was a detraction from the core ethos of the event. Suggestions were made of alternative solutions such as more water on route, longer cut off times etc – however, the call was made a shortened stage of 62km to the 2nd water point was the decision.

The shorter distance resulted in the pace being on from the gun, and the average speed of the stage being a shade under 20km/hr – substantially higher than the average of the previous stages.

In an effort to pull back some time, Jaroslav Kulhavy & Christoph Sauser won the stage, but weren’t able to gap the in-form and on-point teams of Manuel Fumic & Henrique Avancini (3rd on the stage, but retained the Leaders jersey) & Nino Schurter and Matthias Stirnemann.