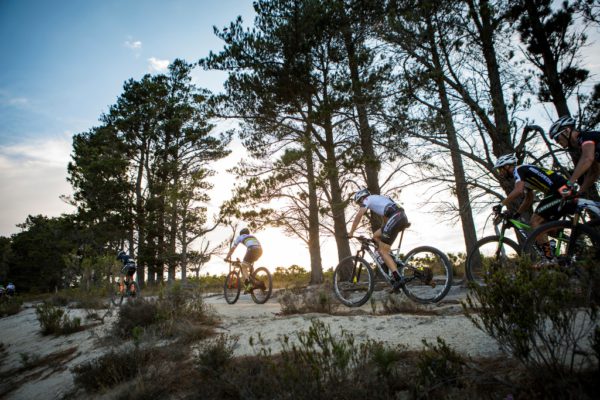 Christoph Sauser in the lead bunch, as the sun rises on Stage 2 of the 2017 Absa Cape Epic. Nick Muzik/Cape Epic/SPORTZPICS

When the African elements conspire against 1 200 riders taking part in a mountain biking event something has to give, and after the brutal heat and humidity of Stage 1 the Absa Cape Epic organisers took the decision to shorten Stage 2 from 102 kilometres to 62. The shorter route did not suit the marathon strengths of Christoph Sauser and Jaroslav Kulhavý on paper, but the Investec-songo-Specialized team know how to win even when the odds are seemingly stacked against them.

The scheduled stage was set to take the riders from the Atlantic coast, and Hermanus, into the Riviersonderend Mountains, and Greyton on Tuesday the 21st of March. Moving the stage finish forward by forty kilometres, to the Caledon Botanical Gardens prosed a significant logistical challenge. While for the elite riders the challenge would be a different one; as the short route meant there would be no room for easing into the stage – the pace was therefore frenetic from the off.

“Ja, furious pace that’s for sure” Sauser stated as he reflected on the stage victory. “I mean we didn’t rest one time, but I felt really good on the climbs. [Even though] I completely underestimated the KOM [King of the Mountain]; I went in the back and was unprepared for it. Then it starts hurting and we lost maybe 15 seconds there” to Nino Schurter, Matthias Stimemann, Manuel Fumic and Henrique Avancini he confirmed.

With Kulhavý’s superior strength on the flat roads, compared to the riders ahead of them, there was no need to panic. The Investec-songo-Specialized riders took no risks on the singletracks and then the Czech Express Kulhavý kicked into overdrive on the district road. “Coming out of the singletrack through the forest one of the riders in the lead group took a drink and Jaro attacked, I jumped onto his wheel and they lost a lot of time there for sure” Sauser explained the catch.

Then the pair went from chasing to leading when they opened a small gap on a smooth climb. But nothing in the Absa Cape Epic is easy, especially not stage victories. “There was a sharp right hander, really lose, and we both went in too fast; so we had to get off the bikes and they [SCOTT-SRAM and Cannondale Factory Racing] came back. It wasn’t easy to ride and they could read the lines [taking the fastest lines with the aid of Sauser and Kulhavý’s tyre treads]” he continued. 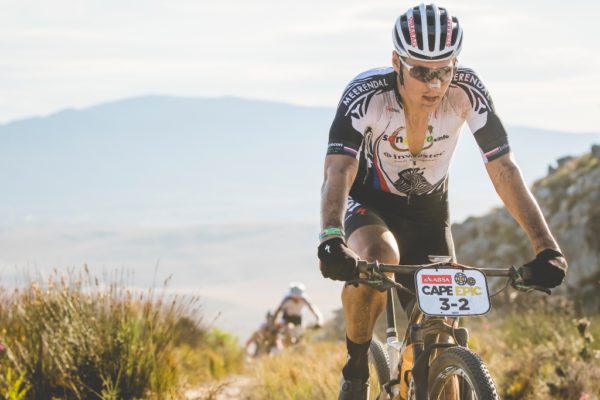 Jaroslav Kulhavy leads Christoph Sauser over the King of the Mountain Shaw’s Pass climb during Stage 2 of the 2017 Absa Cape Epic. Photo by Ewald Sadie/Cape Epic/SPORTZPICS

Coming into the tricky finish the Investec-songo-Specialized pair was on the front of the lead group. When the route bottle necked the riders down to single file, after a jeep track descent just 100 metres from the finish, the stage was all but won. With Kulhavý leading Sauser could afford a quick look around. “I knew I could let Nino go because there was nobody behind Nino” he concluded reflecting on how the stage was won. Kulhavý crossed the finish line first, followed by Schurter, then Sauser and the second SCOTT-SRAM rider Matthias Stimemann just under a second behind Sauser. The race leaders, Manuel Fumic and Henrique Avancini of Cannondale Factory Racing XC were third on the stage, 2 seconds after the stage victors.

Stage 3 of the 2017 Absa Cape Epic will take place on the trails of Greyton, on Wednesday the 22nd of March, and will challenge the riders with a 78 kilometre long technical singletrack filled course. When asked about how he foresees the stage panning out and if it will suit Manuel Fumic or Nino Schurter Sauser replied: “Ja I think so, but we’ve been racing flat out for two and a half days now… but there’s always someone who wants to try”. So perhaps it will not be the day for the cross-country specialists the organisers expected, as the Absa Cape Epic’s war of attrition begins to take its toll.

You can follow all the Absa Cape Epic the action live on www.cape-epic.com from 07:00 tomorrow and watch the Stage 2 highlights on SuperSport 2 at 21:30 tonight. You can also engage with the team by following @songoinfo on Twitter or liking the songo.info Facebook page.