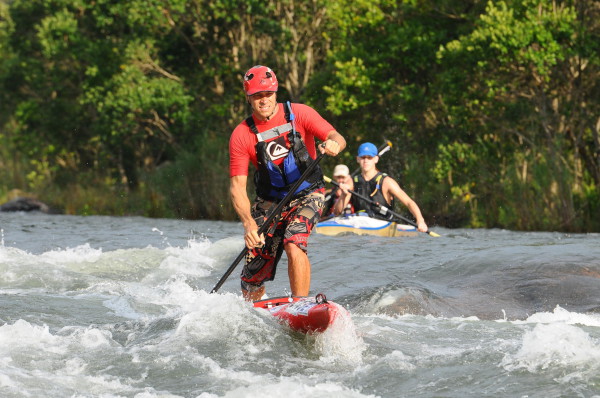 Cradock – A handful of pioneering Stand Up Paddleboarders are planning to make history by taking on the legendary two-day 82km Hansa Fish River Canoe Marathon from Grassridge Dam to Sports Ground in Cradock on 9 and 10 October.

Spearheaded by Dean Bottcher, who is part of the group that first paddled the Dusi and Drak Challenge marathons on Stand Up Paddleboards (SUPs), the snowballing popularity of the sport could well see SUP paddlers converging on Cradock in substantial numbers for the popular race.

Bottcher and his SUP designer friend Brendan Germaine aim to cover the full 82km long course of the race, to prove to the organiser that the SUP craft can safely negotiate the rapids, weirs, and in particular the willow trees that lace the top section of the river.

At the same time interest is being expressed from various SUP communities in Gauteng, the Western Cape and in KwaZulu-Natal to take on the 40km short course option that is aimed at more recreational paddlers.

“I am really looking forward to doing the Hansa Fish on a SUP because it is the kind of river the really lends itself to river SUPs,” said Bottcher.

“There is a guaranteed water release and the river flows throughout, so there aren’t any flat sections which is where we struggle.”

“An unlike the Dusi we don’t have to carry our SUPs over any hills, which is really good news!” he added.

Bottcher is planning to do the race on one of the new generation inflatable SUP boards that were first seen on the Dusi this year, where American’s Slater Trout and Corran Addison showed how well suited they are to river racing, with Trout winning the SUP class in a new record time.

“The inflatable SUPs are great,” said Bottcher. “They are more durable, but they aren’t necessarily as fast as a rigid board, which we might still choose for a really competitive race.”

He predicted a turnout that may well set a new record for a SUP entry into a major river marathon. “Andrew Kellet has a thriving SUP community going in the Cape and there are about five SUP paddlers from Gauteng talking about coming to do the Fish.”

“I have a number of women from KwaZulu-Natal training to do the race as well, aiming at the short course, which is a manageable distance each day and more recreational in nature,” he added.

“The Fish is so well suited to river SUP racing that I really feel it will be the breakthrough event that exposes SUP river paddling to the whole country,” he predicted.

Bottcher has done one Hansa Fish before, in a K2 with Germaine, and is looking forward to evening the score with the monster rapid Keith’s Flyover, ten kilometers into the race.

“Yoh! In all my years of paddling on rivers, the beating I took from Keith’s Flyover was the worst I have ever had,” he says.

“We fell out above the bridge and did some serious downtime. The boat broached sideways across the river and we were sluiced under it.”

“I will definitely give it a go on my SUP. In big rapids we actually lie down on the board, so we can take on basically any rapid. That way I might be able to get even with Keith’s!”

The race rules pave the way for SUP to easily enter the short course option, while Bottcher and Germaine have so far convinced the organisers to allow them to pioneer the full course.

Either way, the arrival of these unique craft in Cradock for the popular two-day marathon will write a new piece of history into the annals of the 34 year old race.